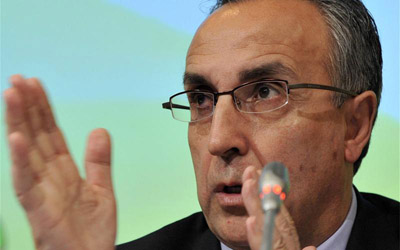 Alejandro Blanco will lead the Spanish Olympic Committee (COE) for another four-year term after being re-elected at the COE’s Extraordinary General Assembly.

Blanco was the sole candidate and received 153 of 167 votes. The remaining 14 ballot papers were returned blank. Theresa Zabell will continue as vice-president of the COE, generic Victor Sanchez as the organisation’s secretary general and Juan Dominguez as its treasurer.

Blanco has held the presidency since September 2005 and said: “We have been through eight long years – though I would describe them as short – a period of time in which we have shared some happy times and some sad ones too. We are now facing four more years in which the good news will outweigh the bad, and in which we will get things right and also face problems, in the hope that we will overcome them.”

The newly re-elected COE president announced that during this latest term in office he will continue to support athletes, both in their training and when they retire. As well as offering his continued backing for the Sport and Women’s Commission, he said that a further step had to be taken in terms of training to allow degree and postgraduate courses to be set up.

Madrid are looking to host the 2020 Summer Olympics and Blanco hopes they will be triumphant in the bid.

Looking forward to the 125th IOC Session in Buenos Aires on 7 September this year, Blanco said Madrid faced a “major test” and added: “Barcelona was a major change, and now Madrid should see the second major transformation of Spanish sport. We will cross the ocean to make our great dream come true.”