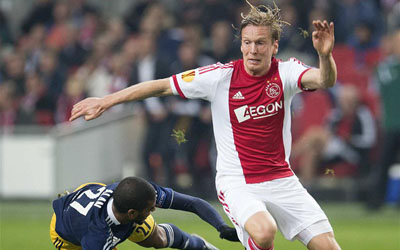 The Ziggo brand will be featured on the official first team and Young Ajax shirt.

The Dutch champions have confirmed the deal will be worth €8 million a year, with an additional variable fee of €2 million being agreed.

In the first six months of the deal, the fixed and variable fees will total €4 million and max €1 million respectively.

Ziggo will have an option to cancel the deal after two and a half years with 12 months’ notice.

Ajax will retain the ability to close a separate sponsor deal for its youth teams, its women’s teams and its Saturday amateurs.

It will also be able to sell partner rights to sports park De Toekomst, as none of the above is included in the deal with Ziggo.

Ajax CEO Michael Kinsbergen: “Ziggo gives us a partner that really matches well with Ajax. It’s a modern, ambitious company with lots of young people in its workforce.

“It has a central position in society. It felt good from the first time we met. We are looking forward to a fruitful cooperation.”

“Ziggo, as a new national cable and media company, now has the ability to present itself in unique way, thanks to this partnership. It’s a logical choice for both parties. We are very excited about this cooperation.”