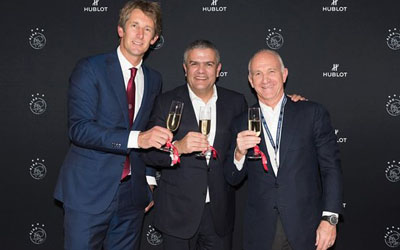 Hublot has been the Official Timekeeper of Ajax since 2011 and the two parties have agreed a new three-year renewal to their existing deal.

Ricardo Guadalupe, CEO of Hublot said: “After three years which worked to everyone’s satisfaction, the decision to renew the agreement was an obvious one.

“Ajax is one of the most successful clubs of Europe and is full of passion and motivation. Features which we recognize in ourselves and also like to associate with.”

Director of Marketing Ajax, Edwin van der Sar said: “The continuation of this sponsorship agreement reaffirms that we maintain a good relationship with our sponsors.

“Ajax is committed to long-term partnerships. I am therefore delighted that we have extended with Hublot, the watch brand that has been seen for years in the top of world football.”

Hublot has been associated with football for a number of years. They began by sponsorsng the Swiss Football Association, quickly following that up with deals with FIFA, UEFA and Manchester United FC.