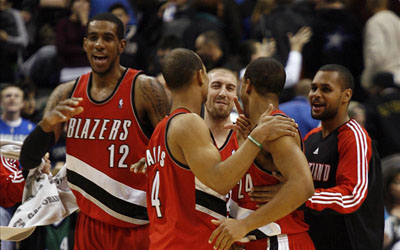 McGowan joins the Blazers from his position as Chief Operating Officer of AEG Sports, where he has played prominent leadership roles in the reigning NHL champion Los Angeles Kings and the MLS’ Los Angeles Galaxy.

“It is a great day for the Portland Trail Blazers as we welcome Chris to the Northwest,” said Trail Blazers Owner Paul Allen. “With his demonstrated leadership with the Kings and Galaxy, I am confident he will find ways to improve the Blazers’ business performance, which is key to the team’s overall success.”

McGowan replaces Larry Miller, who resigned as the team’s president in July to return to Nike, and joins General Manager Neil Olshey and Head Coach Terry Stotts, who were both hired earlier this year. He will assume his new position on November 12.

“With Chris now onboard, the Blazers’ new leadership team is complete,” Allen said.

“I am honored to take on this role,” said McGowan. “I have always admired the strength of the Trail Blazers’ brand and the passion of their fan base and am eager to join the staff as we continue building an organization the city can be proud of.”

McGowan will manage all business operations of the team and the Rose Garden. He will report to Peter McLoughlin, currently president of the NFL’s Seattle Seahawks and MLS’ Seattle Sounders FC, who is assuming the role of CEO of Vulcan Sports and Entertainment (VSE). VSE oversees the business operations of Allen’s sports franchises and facilities. McLoughlin will continue in his roles with the Seattlefranchises as well as with First and Goal, Inc., which manages CenturyLink Field.

“I’m excited to work with Chris,” said Olshey. “I was impressed with his leadership abilities and look forward to a successful collaborative effort.”

McGowan earned his degree in International Relations from the University of Delawareand began his career with AEG in 1996.  His success in sales and his strong organizational and team-building skills propelled him up the ranks of AEG. In 2007, he was named Chief Operating Officer of the Kings, where he oversaw the team’s business operations and led the team to increased revenue from ticketing, sponsorships, concessions and other areas.

Earlier this year, McGowan was named head of the newly formed sports division, AEG Sports. In addition to overseeing the Kings and the Los Angeles Galaxy, McGowan assisted with the operations for all of AEG’s sports teams and properties around the world.