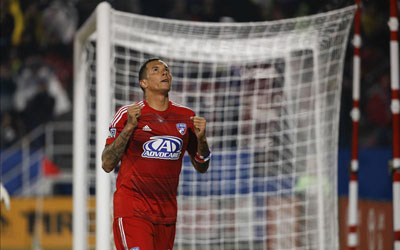 The two organisations have renewed their multi-million dollar partnership through 2020.

“Our journey with FC Dallas started two years ago and has helped accomplish one of our biggest goals at AdvoCare – to build brand awareness,” AdvoCare president and CEO Richard Wright said. “Our ongoing relationship allows both AdvoCare and FC Dallas to grow even stronger as we continue to build champions together.”

AdvoCare was originally announced as FC Dallas’ first jersey sponsor on June 27, 2012. The extension includes plans for FC Dallas to unveil a new away kit in 2015 and a new home kit in 2016.

An extension of the initial agreement that put AdvoCare’s logo on the front of all team gear, AdvoCare will continue to have a major presence throughout Toyota Stadium and Toyota Soccer Center. The sponsorship also keeps the AdvoCare logo on FC Dallas Academy and youth jerseys.

“We couldn’t ask for a better hero partner over the past two years,” said FC Dallas president Dan Hunt. “We are looking forward to building on the solid foundation that has been established.”