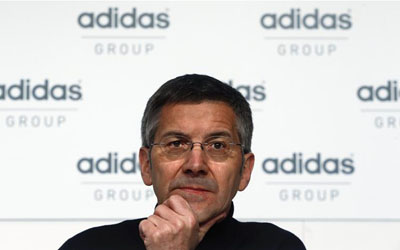 With the World Cup on the horizon, German sportswear company adidas has revealed its sales targets for 2014 with a 8 percent rise expected due to the prestigious competition beginning next month.

As a World Cup sponsor, adidas provides the official match ball and is kitting out nine teams of the 32 finalists, including current and former world champions Spain, Germany and Argentina.

“This year we will add 1-1.2 billion euros ($1.4-1.6 billion) to operational revenue, with the World Cup playing an important role,” Chief Executive Herbert Hainer told journalists at a briefing in Munich.

That increase represents a rise of 7-8 percent from the 14.492 billion euros of sales Adidas recorded in 2013. Previously, Adidas had guided for a “high single-digit” increase in currency-neutral sales in 2014.

The world’s second-biggest sportswear firm has been losing market share in western Europe, its home territory, to Nike, which is also challenging the German company’s dominance in the soccer market.

Nike is supplying teams from 10 countries, including the Brazilian hosts, at the World Cup.

“Football is the DNA of our company. We want to clearly show that we are number one in soccer,” Hainer said, adding adidas expected to sell significantly more balls than at the last World Cup in South Africa four years ago and about as many shirts.