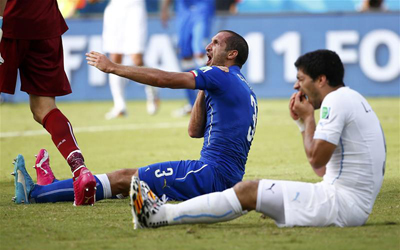 Adidas and 888poker have hinted that they could re-examine their deals with Suarez, who is being investigated by FIFA for the incident at the 2014 Brazil World Cup group stage game.

888poker only signed an agreement with the Liverpool forward last month, but released a statement via Twitter that read: “Following recent allegations made against Luis Suarez, we are reviewing our relationship with him.

“We will not tolerate unsporting behaviour.”

Adidas said they would wait until FIFA had investigated and would then “respond accordingly.”

No stranger to controversy

It is not the first time Suarez has been involved in a biting allegation during a football match and the striker is no stranger to controversy.

Last year he was banned for the start of the Premier League campaign after biting Chelsea’s Branislav Ivanovic.

He also bit a fellow footballer whilst playing for Ajax and was accused of racism towards Manchester United left back Patrice Evra.

Nigel Currie, sports sponsorship expert and consultant for brandRapport said: “It’s pretty damaging for him, it’s not as if he hasn’t had previous.

“He could end up missing out on a chance of a lifetime of being a hero at the World Cup. Although he’s a great player, there are others around and if there’s a big risk they (the sponsors) will go for a safer option.

“This is the real shop window, the real global opportunity to become one of the top global superstars.”

Should sponsors end their relationships with Suarez? Have your say in the latest iSportconnect Discussion