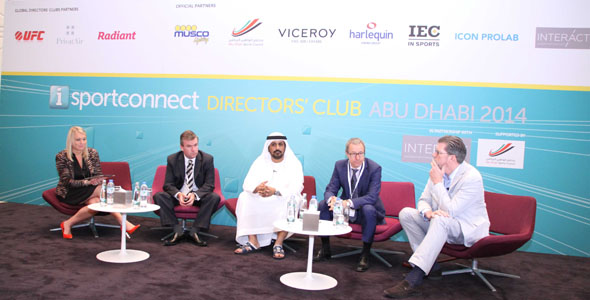 The successful inaugural Abu Dhabi iSportconnect Directors’ Club, in partnership with INTERACT took place at the Yas Viceroy Abu Dhabi yesterday and saw over 70 key stakeholders gather to discuss their challenges in the sports industry in the region.

The Directors’ Club started with an opening speech from H.E. Aref Al Awani, Secretary General of Abu Dhabi Sports Council which was followed by a keynote with Al Tareq Al Ameri, CEO of the Yas Marina Circuit and Abu Dhabi Motorsports Management – the hosts of the finale race of the Abu Dhabi Grand Prix in just two weeks’ time.

The debate saw very open discussions and a lot of interaction from the audience on local participation, grassroots, health and corporate wellness and how to ensure a cohesive strategy is in place to improve these areas.

A lot of discussion took place on grassroots sport with many of the participants keen to ensure the industry comes together collectively to imbed sport into the culture of the city.