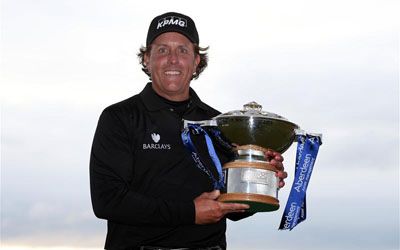 The Scottish Open, won on the weekend by American Phil Mickelson, is set to go ahead until 2017 after Aberdeen Asset Management and the Scottish Government renewed their backing.

After three years at Castle Stuart, the event will be staged at Royal Aberdeen next year before moving around some of Scotland’s top links courses, with a likely return to Castle Stuart in 2016.

First Minister of Scotland Alex Salmond said: “I am delighted that the future of the Scottish Open has been secured up until at least 2017.

“This fantastic event has become a popular fixture on the European Tour and provides ideal preparation for some of the world’s best players before the following week’s Open Championship.

“I’m proud of the Scottish Government’s continuing support for this event which brings significant benefits to the whole of Scotland, both in terms of tourism and television exposure, while also providing a multi-million pound boost to the economy.”

Peter Adams, the European Tour’s director of international championships, said players would be “consulted quite widely” over possible future venues.

“We have time on our side and can go and look at courses and can also talk to the players,” he said.

“We can use that time wisely. I think there is a will to move the tournament around geographically but the decision has not been reached.”

Martin Gilbert, Chief Executive Officer of Aberdeen Asset Management, said: “We’re thrilled to be continuing with this sponsorship. We’re two years into our current three year agreement and we’re extremely happy with what the tournament has delivered for our brand both in the UK and internationally; at Aberdeen we’re long term investors in our day to day business and this sponsorship is no different.”