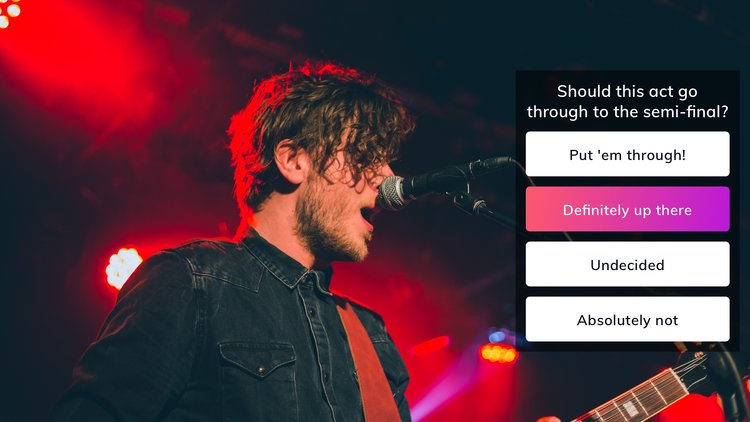 5 Reasons Why Interactive Video Is About To Explode

People love to interact with their favourite TV shows and live events in their millions. Last month at Monterosa, we handled billions of votes for the MTV Millennial Awards and over 3.5 million users of the Love Island UK app – just two examples out of many.

Most of this interaction happens on smartphones, inspired by persuasive calls-to-action from the TV show that encourages users to download an app or visit a particular website.

These engagements are designed for the committed and passionate fans that want to put themselves at the heart of the action, make decisions and get real-time exclusive content. It takes some effort to get involved and there is a degree of friction. But how big could those numbers be if the interaction was an integrated part of the watching experience itself? Apple’s Eddy Cue predicts that the future of TV is much more interactive.

We’ve seen a string of demos and tests of interactive video over the last decade – whether that’s red button technology or the myriad startups offering watch-and-buy solutions. While those of us from gaming backgrounds have been inspired by the great potential, there have been several factors holding these technologies back from mainstream success:

But we’re now in a world of Twitch extensions, of TikTok lip syncing, where millions of people daily create interactivity on their Instagram stories. Younger viewers watch a growing portion of their TV on connected devices. We believe the moment has arrived where the problems can be overcome and that a new generation of interactive options will become a fundamental part of every OTT platform, every TV app both live and on-demand.

Here are 5 reasons why:

Talk to any broadcaster or OTT about interactive overlays five years ago and they would wince. “We’re working on making the quality better!”, they would say. Those hard yards have now paid off and the standard of mass video delivery is generally excellent, reliable and slick. Now the focus is on differentiation via better user experiences that increase loyalty and engagement.

As video providers have consolidated and trends shifted to standardisation, we now see a smaller number of best-in-breed providers and increasing modularity in the tech stack. It’s much easier to introduce new SDKs or plug-ins when dealing with a lower number of video player variants and behaviours. This makes introducing interactivity lower friction and easier to maintain.

Following the lead set by HQ Trivia, mobile-first gameshows like Quipp in Germany and Austria (powered by Monterosa for ProSiebenSAT1), and many other versions globally have normalised interactivity with video.
Within drama, Netflix are experimenting with Bandersnatch, and organisations like the BBC are building branched-narrative creator tools.

This trend will continue, not as a replacement for lean-back consumption, but a new option that will be driven by the major tech platforms and will put pressure on traditional broadcasters of entertainment and sports to keep up. The cost of not allowing viewers to be part of the action will be measured in subscription churn rates and declining viewer numbers!

4. Because the business models stack up

Ancillary digital activity around TV formats and sports have often struggled to get traction and produce positive ROI due to the friction involved in participation. Traditionally it has been too much effort to type in a URL or download an app for a small moment of interactivity. Only the big moments of decision-making or fully integrated gameshow play-along have driven sufficient take-up to generate profits.

By reducing friction of new app downloads and overlaying interactivity tastefully, response rates will go up and the business models associated with competitions, voting and sports betting become more effective. No longer will positive ROI depend on the “big interactive hit”, it will become business-as-usual.

5. Because it’s fun and creativity is everything.

Saving the best for last, let’s not forget that creativity and the resulting enjoyment of great content is the biggest driver of trend and adoption. There is a wow factor with interactive video that once you experience it, leaves you wanting more. Giving your opinion on whether a penalty was correctly given with hundreds of thousands of other football fans by simply tapping on the livestream on your mobile phone – seeing the result in real time, then hearing the commentators refer to the live results – that’s fun.

Voting for your favourite contestant with virtual ‘claps’ as she or he is singing. Getting ball position/speed information in real-time while you watch a golf tournament. The possibilities are many and will only increase as more creativity is poured into the area.

We have proven time and time again that when the creators of the content themselves – the writers, producers and directors – are involved, interactivity rates soar. For instance within Love Island, Monterosa powers the Watch & Shop service which has generated £15 million in gross revenues. The success is partly down to our own integration of impulse buying to the show’s app, but also linked to the way producers integrate products into the show meaningfully.

When the creator of Million Pound Drop embraced play-along as a core part of the format, we broke records for live participation and defined a new generation of copycat formats trying to reproduce the success.

If you hadn’t guessed by now, we at Monterosa are big believers in the power of interactive video. And our LViS | Interaction Cloud – already used to power mass interaction for premium broadcasters, sports organisations and brands around the world – is the most powerful and creatively versatile platform on which to build an interactive video strategy. Integrating seamlessly with whichever video solution you are currently using, our technology and track record of success combined are a potent combination.

If you are as excited by the possibilities of interactive video as we are, drop us an email and let’s get started, we’ve got some very exciting developments to share.