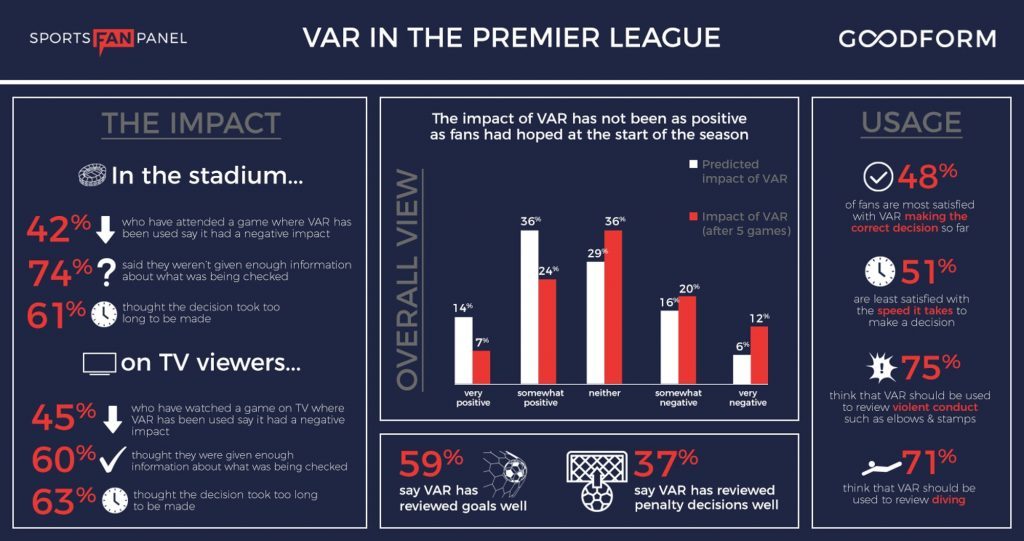 Only 31% Of Fans Believe VAR Is Benefitting The Premier League, Say Goodform

Goodform have completed their latest Sports Fanel Panel survey, in which they asked fans their opinion on VAR for a second time, to see if their views on the technology had changed after seeing it in action during Premier League games.

The early results indicate an overwhelmingly negative view from fans in comparison to how they viewed VAR prior to the season.

Now into the new season, the Sports Fan Panel showed a big drop-off to 31%, from the initial 50%, who thought VAR would have a positive impact on the league. While the amount of fans who felt VAR was negatively impacting the product has now risen to 34%, from 22% who thought this would be the case prior.

From the first 80 games of the season, the Professional Game Match Officials Limited said that there have been 475 incidents checked by VAR. With 59% of people saying VAR had been used well to review goals.

Is there a difference between in-stadium and viewing from home?

Results were markedly worse from match-going fans, with 42% stating it was worsening their experience of the match. They added reasoning to their concerns, 74% feeling that they did not receive enough information and 61% that the decision took too long. In the first survey, the time taken for a decision had been pointed out as a concern, with 85% worried it would take too long. However, 70% of fans do believe that by showing the incident on the big screen to give them more information would help.

But viewing from home the perspective was changed greatly, with 45% of people feeling it was positive and the same percentage believing it was negative. For home-viewers, 63% did say too much time was still being taken over the decision, but 60% felt there was enough information given to them.

The biggest change that could be made in the view of the fans at home, with 78% agreeing on the issue, is that referees and assistants should be mic’d up so that fans are able to hear their decision-making. Fans also were of the opinion that violent conduct and diving should also be reviewed.

Overall, while these results are not overly positive, there is still a long time for VAR to improve, having only been introduced into the Premier League this year. It will remain to be seen whether fans will warm to it over time.