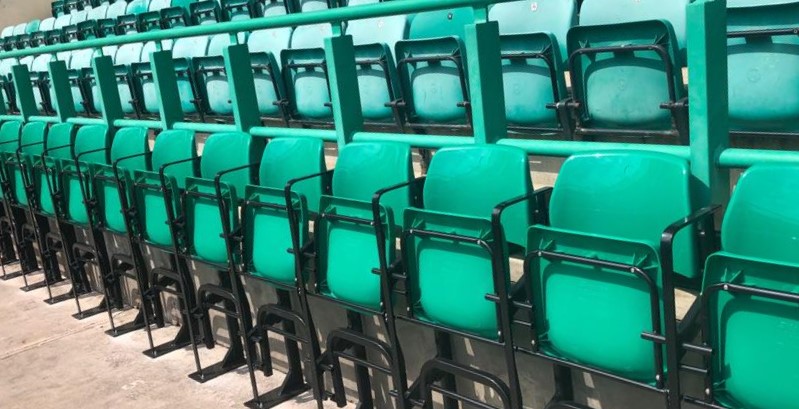 Fans who stand at games in the Premier League and the Championship are constantly requested to sit by stewards.

A number of football fans have been campaigning for the ban on standing at stadiums should be lifted, but the current model of all-seater stadiums does not safely allow for this.

However, a new seating concept has been devised, called 2020 Seating, which solves the problems of persistent standing, from both the club and fan perspective.

If you’re short and can’t see or don’t want to stand for long periods, you probably won’t see the most exciting action when other fans stand in front of you. That is essentially what we set out to solve.

Potential problems exist for fans that may not be able to stand for a full 90-minute match and therefore require the use of seats, where their view of the game, the reason they paid their ticket, is then blocked or impaired. This is also problematic for younger people and children who are attending the games.

2020 Seating solves these dilemmas, by eliminating the problem of persistent standing at football grounds and delivering a safe environment for all. It enables supporters to see the action, even if everyone around them is standing, and includes a guardrail to block supporters from falling. They can be set out in a theatre style, with off-set seat centres in alternate rows, which further improves fans’ views or in the traditional lines of seats i.e. one behind another. You can also enjoy an enhanced level of comfort as the seats are fitted with armrests and footrests, with design options to accommodate ambulant disabled fans.

This concept has been developed by Noel Jeffs and Michael Cunnah, who have over 40 years’ combined stadium management experience gained at a senior management level at Wembley Stadium, Aston Villa Football Club, Galatasaray Sport Kulubu, Turkey and Al Ain FC, UAE. The elevated seats ensure that all supporters’ eye levels are the same regardless of whether they’re sitting or standing, and Cunnah said: “With conventional seats, if you’re short and can’t see or don’t want to stand for long periods, you probably won’t see the most exciting action when other fans stand in front of you. This is no longer a problem if 2020 seats are installed”.

The 2020 seats have been installed in the family stand at Wycombe Wanderers’ Adams Park Stadium, and also at Scottish Premiership side Hibernian FC’s Easter Road ground. They are produced by 2020 Seating Ltd in conjunction with Alderdale Seating, and have been cleared for installation in stadia throughout England and Wales under the UK Government’s ‘all-seater’ stadium policy by the Sports Ground Safety Authority.

Installing the seats in a theatre-style layout mitigates the risk of fans spilling into the gangways which makes the areas where 2020 Seats are installed incredibly safe.

Noel Jeffs added: “A lot of clubs actually have problems when everybody stands as fans spill into the gangways. There’s also a high risk that they will topple over seats in front, particularly during goal celebrations. We started thinking about how best we can mitigate all these issues and we solved the problem by raising the seats, which also enables the guardrail to be raised to the regulatory 1.1m in height.

“The seat is also multifunctional as it improves the customer experience and allows for the inclusion of families and disabled fans. There is also a cost benefit in terms of reducing stadium and temporary stand construction costs.”

Michael Davies, General Manager at Wycombe Wanderers, said: “As a club, we’re very open-minded about trying new things. We’ve reached a point where we were looking to upgrade to provide something better and safer for our families as the existing seats got older. The bespoke 2020 Seat installation in the Frank Adams Stand at Wycombe has also proven to be a cost-effective solution to reprofiling the old standing terrace, which has avoided the cost of demolition and reconstruction.

“I think the best thing about these seats is that they’re not typically like most rail seats. They are off-set so if someone stands in front of me, I can look through the gap over their shoulder. We hope to install more of these seats around the ground when the time comes. I’d have no hesitation in recommending it to other clubs.”

Clubs such as Wolves and Tottenham Hotspurs have installed seats with barriers where everyone stands. Those that wish to sit go elsewhere in the stadium.

The 2020 seat is a hybrid and therefore means that fans don’t need to choose between sitting or standing. Installing the 2020 seat give the “standers” and the “sitters” what they want in a safe environment that is compliant with Green Guide 6.

No longer is “sitting or standing” a decision that fans have to make – they can do both whenever they wish.