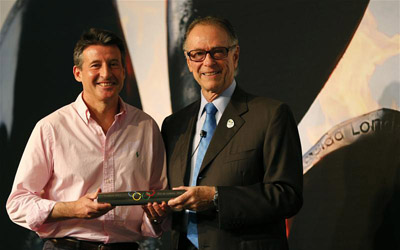 The event was hosted by Laureus, discount which is staging its prestigious World Sport Awards in Rio on Monday, and also featured Sebastian Coe, Chair of the London 2012 Games.

President Nuzman talked about the sporting legacy that would be left by the Rio 2016 Games, highlighting the construction of South America’s first Olympic Training Centre at the Barra Olympic Park, which will leave cutting-edge training facilities for a range of Olympic and Paralympic sports.

He also pointed to the wider benefits of the Rio 2016 project, such as the improvements to Rio’s public transport systems, the construction of new hotels, the Rio 2016 education programme that will promote the Olympic and Paralympic values in public schools, and the impact of greater self-esteem among Rio residents.

“Rio is becoming another city,” Nuzman said. “The Games are leaving a legacy that will be an example for future Games organisers.”

President Nuzman said the IOC’s decision in 2009 to award Rio the Games was a symbolic moment that underlined the capacity of sport to drive social change. “It was a victory for a city, a country and a continent,” he said. “The IOC understood it was time to reach another region of the world and the Games in Rio are a symbol of the sporting world’s understanding about the transformational power of sport.”

Coe, who now advises the British government in his role as Olympic Legacy Ambassador and is also a member of the Laureus Academy, stressed the power of sport to change lives. “I’ve always said that the most potent social worker in any community is sport, and the deftest diplomat on the international circuit is often sport,” he said.

Coe added that he had seen first-hand how London 2012 initiatives had achieved positive results in British schools. “Any physical education teacher will tell you that if a child finds self-esteem through sport, and the ability to work together or commit to something in an individual sport, so often they will go on to find self-esteem in other areas and confidence to achieve academically and turn their lives around.”

André Lazaroni , the Rio de Janeiro State Secretary for Sport and Leisure, was alongside Nuzman and also talked about how Rio and Brazil would benefit from the Games. “We will have a better city for our citizens and for welcoming all the visitors who come here,” he said. “The state and city governments have invested millions of (Brazilian) reais in developing transport and this will be one of the greatest legacies. It has also been possible to develop partnerships with the international sports community and this is helping us to develop coaches and discover new talents – not just for the 2016 Games but beyond to 2020 and 2024.”