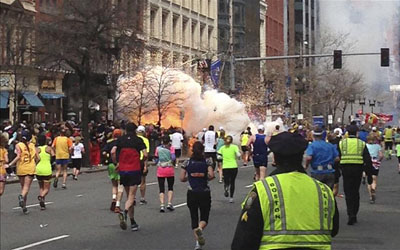 Following last year’s bombing catastrophe, the 2014 Boston Marathon will have a ‘no bags’ policy.

The Boston Athletic Association, which has managed the annual event since its inception in 1897, announced the changes ahead of the April 21 running.

As part of the policy competing runners will not be allowed to bring bags of any kind, however they will be able to check in spare clothing and accessories at an allocated booth in a nearby park.

The items would be placed in clear plastic bags at Boston Common, and runners would not be able to access any checked bags until after the race.

In addition to the runners, spectators will also be prohibited from carrying any kind of bag near the start or finish line.

Bags are also banned in some areas along the track, which runs through a number of freeways and city streets in and around Boston.

The changes were announced 10 months after the running of the 2013 marathon, which saw two bombs planted and exploded on the footpath in the final 200 metres of the course.

The shocking incident saw three spectators lose their lives with more than 200 others injured.

For this year’s event, the association has also handed some runners automatic entry if they ran at least half of last year’s race without finishing because of the recovery efforts.