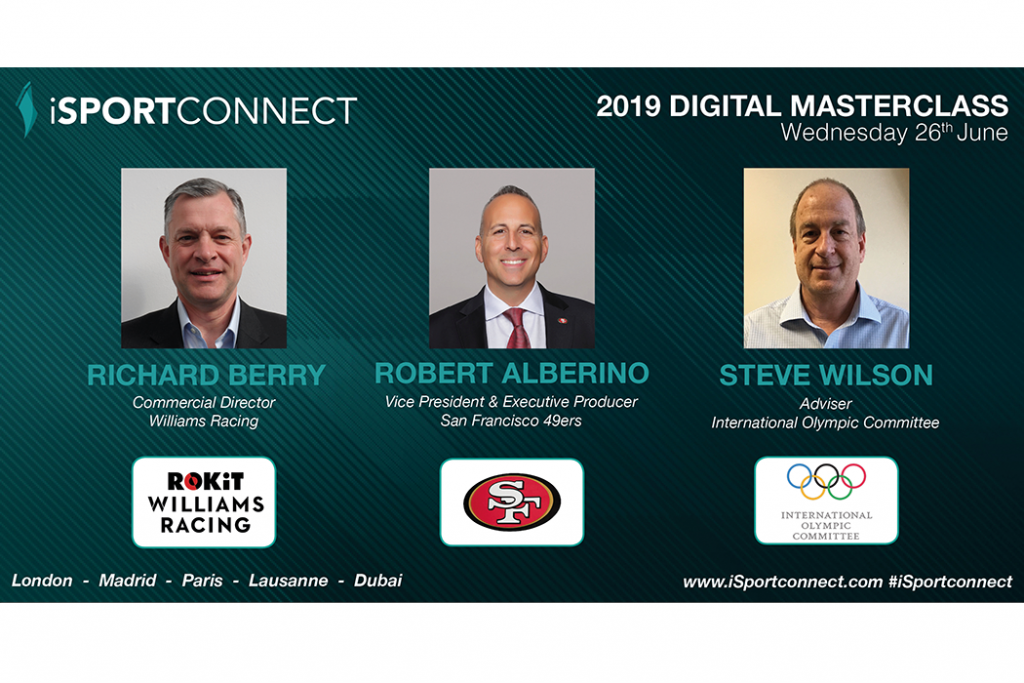 iSportconnect is delighted to announce that Richard Berry of Williams Racing and Robert Alberino of the San Francisco 49ers will be speaking at our 2019 Digital Masterclass will be held on Wednesday 26th June in London.

The Masterclass will look at the world of digital to reach and engage with fans throughout the event lifecycle, hearing from expert speakers sharing their experiences of communicating with their target audiences. With the actual field of play action making up such a small window of fan engagement, how do you keep the conversation with fans going outside of the live event experience? Given the rapid development of new technologies and channels available to speak to fans, how do brands keep up? Are your strategies to keep up with the changes robust and nimble enough while staying effective and relevant in an ‘always-on’ and competitive fan environment?

The Masterclass will also look at how the individuals within the sports universe are taking the power of social media and digital channels to speak about causes and issues affecting the world of sport, and for the very first time, we have Olympic medalists sharing their experiences and insights on their abilities to influence the very core of sport through digital.

Richard began his career in the media industry working for ITV and ESPN before joining a startup in the growing sports research industry. After this was sold to what is now Nielsen Sports, he had a short spell with IMG, which led to the Honda F1 team in 2008, where he remained for 5 years, including the World Championship winning Brawn GP. After leaving the Mercedes F1 team in 2012, he then spent three years in football, working in various roles for Manchester City FC, Glasgow Rangers FC and the Premier League. From the Premier League, Richard joined the Williams F1 team as Commercial Director, where he oversees all commercial activity and the focus on new revenue streams, including digital and direct to fan.

A veteran of 25 seasons in the National Football League (NFL), Robert is currently in his seventh season as the Vice President and Executive Producer for the San Francisco 49ers. A storyteller at heart, Robert created the team’s in-house production division, 49ers Studios and oversees all production, events, content creation, still imagery and gameday entertainment while having a large hand in marketing, creative design and social/new media for the franchise. A 62-time Emmy Award winner, Rob also spent 3 years with the Kansas City Chiefs, 14 years with the Philadelphia Eagles and was a Filmmaker for NFL Films. In 2012, Alberino was bestowed an honorary enlistment in the United States Army as a Specialist and currently holds the rank of Sergeant. He continues to pay forward the honor by working alongside all branches of the US military on a daily basis. Alberino graduated from Duquesne University in 1992. He and his wife, Lisa, have three children, Jordan (who works for the Minnesota Vikings!) (23), Angelina (16) and Stella GiGi (10).

Hosted by leading Global Sports Communications expert, Ben Nichols (of Ben Nichols Communications), the Masterclass will feature a maximum of 150 invite-only delegates. iSportconnect provides a media/agency free opportunity to network with influential senior-level sports business executives. We are famous for our intimate and relaxed environment, encouraging ideas exchange and helping to introduce you to the right new connections.

To register your interest in attending the 2019 Digital Masterclass, please contact Chloe McCombie at info@isportconnect.com

Invitation Policy: The Digital Masterclass is a complimentary event for iSportconnect members who are from governing bodies, sports teams, brands and broadcasters. There is no fee to become an iSportconnect member. No sports agencies, professional service providers & suppliers are allowed.