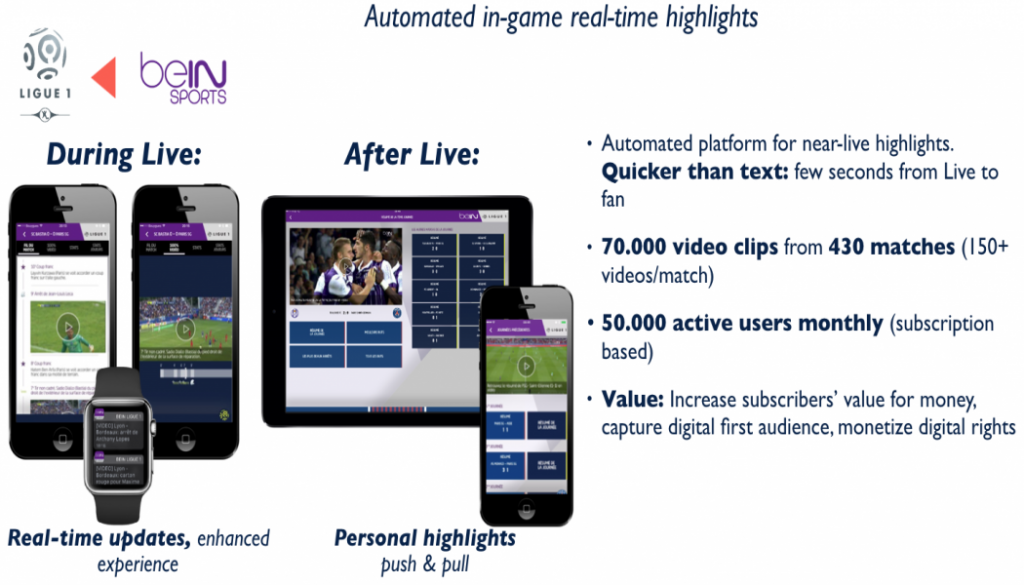 Automated for the People – Ramping up Digital Content Creation

Highlights packages come in different forms in the world of live sports coverage. In 2018, broadcasters are becoming increasingly digitally savvy to meet the insatiable appetite from consumers for instant access to sports event content – with easy share appeal.

Whether it’s the thrills and spills and VAR controversies in football week in week out, or mega-events like Six Nations Rugby, the Gold Coast Commonwealth Games or Russia World Cup in the summer, like never before fan engagement is vital to winning hearts and minds.

One company making waves in this space is Wildmoka, the leading live clipping, editing and publishing platform for broadcasters. Its clip-assembly-publish philosophy is borne out in the work it is doing with clients such as beIN SPORTS through its automated workflow technology to accelerate the delivery of “near live” highlights on social media platforms.

The company’s cloud video solution is capable of assembling and publishing content instantly on multiple platforms, while optimizing editorial effort, reaching new audiences and tapping into new monetization models. In the digital world of today, the beauty of automation allows for tech-savvy minds to channel their energies into being innovative in other areas, while delivering a more immersive and personalized experience for audiences. With IP video traffic predicted to account for 82% of all consumer Internet traffic by 2021, the decision to ‘clip’ is a no-brainer. Social video is estimated to produce 1,200% more shares than text and images combined.

Cristian Livadiotti, co-founder of Wildmoka, is a firm advocate of automation in digital content development “as it allows for massive and quick creation of short form”. He says it also streamlines customer’s workflow “at the service of their own story telling”, explaining that the platform can automatically and almost instantaneously extract, tag and push key moments from live sports to any digital platform.

Due to its versatility, it can be tuned to any editorial requirement and adapted to any kind of storytelling. “The key is to not trade quality for speed, but to achieve the best of both,” he says.

“Digital media, specifically video, is an extremely complex and demanding business,” says Thomas Menguy, the company’s other co-founder. “Our customers require the highest level of availability, as well as the strongest security for the content rights they have invested so much in.

“The telco-grade design of our platform allows us to commit to the highest levels of support and service, and we also enable content encryption to meet those requirements.”

beIN SPORTS offers premium sports programs to more than 3.4 million subscribers. Wildmoka powers  its “beIN Ligue 1 Conforama” in-game mobile service, offering near live access to the best in-game highlights – in a matter of seconds, the TV channel’s editorial team can clip and publish key moments from live football matches. Personalised updates and summary content are also offered. More than 400 matches have been covered in this way already, generating over 50,000 “hot football moments”, as they are labelled.

With the acquisition of the French “Ligue 1 Near-Live rights”, beIN SPORTS wanted to create a mobile-first experience, powered by in-app purchase, that was quickly delivered to meet and even exceed subscribers’ expectations, hooking them in and keeping them loyal.

Livadiotti says: “beIN SPORTS had a huge amount of rights, a lot of content to produce from a lot of matches.

“In order to produce that much content during the match in real time they needed automation. So for beIN SPORTS the differentiation that we put forward was automation. The ability to produce up to 200 clips per match… it is impossible to do that manually and with the level of speed that we are asking.”

Menguy is happy with their partnership with the French TV channel – and there’s more innovation down the line. “When they have seen what was possible, now they are asking a lot more. They are asking for the next step,” he adds.

In February, Wildmoka’s potential to spearhead the evolution of the sports broadcast market was underscored with an investment of $8 million led by venture capital investor Alven. The funding will boost the company’s global commercial expansion and market presence. Other clients include major media companies such as NBC Sports and the International Tennis Federation.

Raffi Kamber, a partner at Alven, says: “By using next-gen technologies like speech-to-text, video recognition, and machine learning, Wildmoka ensures that its offering is well-timed with fans’ rapidly increasing demand for a highly personalized digital experience.”

The founders of Wildmoka, which has five offices on three continents, say the partnership “will allow us to continue driving value for our existing customers. It means they will see more innovation from us at a faster pace”.

With the appetite for personalized content to satisfy individual tastes skyrocketing, Wildmoka’s work underlines the fact that without the ability to automatically deliver the ‘big’ moments from breaking news or sports events, you risk your content never being seen and reduce the chances of building a loyal viewership.