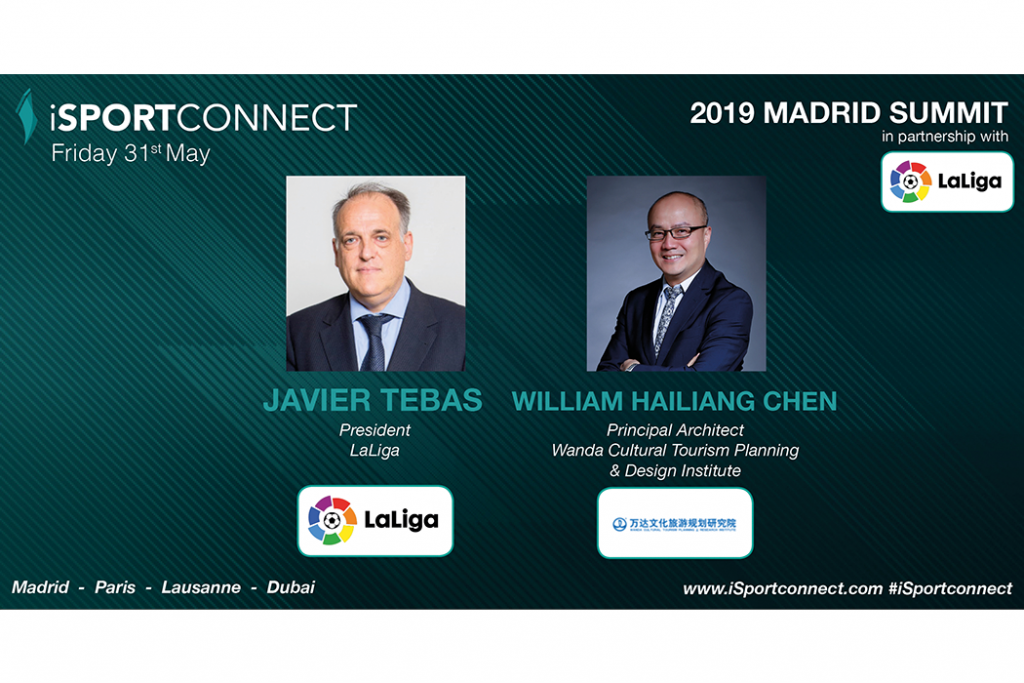 iSportconnect is delighted to announce that our 2019 Madrid Summit will feature Javier Tebas of LaLiga, William Hailiang Chen of Wanda Cultural Tourism Planning & Design Institute, and John Rhodes of HOK. To be held on Friday 31st May at Callao City Lights on the day before the highly anticipated UEFA Champions League Final hosted at Atlético Madrid’s Wanda Metropolitano, this event will kick off iSportconnect’s Global Event Series.

Javier‘s involvement in football began in 1993, when he was named President of Sociedad Deportiva Huesca. In 2001, he was elected as Vice President of LaLiga and in 2003, he was named head of the G-30, a group representing 30 LaLiga clubs which worked on the joint negotiation of their audiovisual rights. Upon taking up the LaLiga presidency in April 2013, Javier identified his main objective of reducing club debts and in just one year, debts owed by LaLiga’s member clubs to the Tax Agency fell by 25%. One of the main achievements during Javier’s term as president has been securing the centralised sale of AV rights for the 2016/17 season, which will allow LaLiga clubs to significantly increase their revenues.

Javier led the fight against piracy and the fight against any kind of violence in football, on which he achieved very positive results, as well as with the transparency policy of the organisation itself. Innovation, technological development and internationalisation also represent other essential parts of his strategy. During these years he has increased the presence of LaLiga beyond Spanish borders, with offices in the United Arab Emirates, the United States, China, South Africa, Nigeria, India and Singapore. As a result of this internationalisation, foreign interest in LaLiga broadcasting rights continues to grow, allowing people in more and more corners of the world to watch the Spanish league.

Since graduating from Architectural Association School, as a UK registered architect William has gained rich experiences on the design and management of high‐rise, hotel, sport architecture and mix‐use development projects. He has worked for world’s leading architectural practices including Wilkinson Eyre Architects, Populous, Foster and Partners on several prestigious projects. He was one of the main designers for the Guangzhou IFC Tower (440m), which won the RIBA 2012 Lubetkin Prize. He was also involved with the design of London 2012 Olympic Stadium from inception to completion. Other notable projects include Liverpool King’s Waterfront development for European Capital of Culture in 2008, 2nd generation apple stores and Apple Campus 2 project in Cupertino.

As Principal Architect, William joined Wanda Group in 2013 to help its overseas development and manage the design and construction of Wanda 5‐star hotels. Since Wanda Sports was set up in 2015, as strategy and planning adviser he has been involved with recent Wanda Sport’s development, particularly on venue design and constructions, project types including basketball arena, velodrome, football stadium and training ground. He is also a Research Fellow of AS Research Centre at the Southeast University in Nanjing. His research focuses on sports facilities and urban regeneration, particularly the conversion of a track and field stadium to a football stadium. He is one of a few experts in sport architecture who have international experience and domestic knowledge.

John is director of HOK’s global Sports + Entertainment practice and is based in the London office. With more than 15 years of experience developing high-profile facilities for a range of professional sports and entertainment activities, John’s work helps to spur urban regeneration and economic development in local communities. John works to advance the next generation of multipurpose sports and entertainment venues that become destinations in their own right. He develops solutions with input from stakeholders including local community leaders, municipalities, investors and fans. John has extensive experience in the design of facilities including Arena’s, Stadia, Formula One circuits, conference and exhibition centres, horse racing tracks and high-performance training facilities.

John’s current work includes the design of the prestigious FC Barcelona Arena. As part of a comprehensive redevelopment of the existing city centre facilities, the 12,000 capacity highly flexible complex will create an organic building geometry that supports a seamless progression between the arena, an auxiliary court for 2,000 spectators, an ice rink and the FCB Escola academy training facilities. Among other prestigious projects, John has been working on the concepts design for the Dubai 2020 World Expo. The 438-hectare master plan encapsulates the core themes of the expo and is based on a long-term legacy goal for transforming the facilities into a convention centre, arenas, theatres and performance spaces after the event. His past work includes the design of several arenas around the world, including the award-winning Leeds First Direct Arena, Abu Dhabi’s new Yas Island Arena, Gateshead Quays Arena & Convention Centre, the new Silverstone British Grand Prix Circuit & Facilities and the FIFA Club World Cup National Stadium refurbishment in Abu Dhabi. Before joining HOK’s Sports + Entertainment practice, John was a principal at Populous. He graduated from Edinburgh’s Herriot Watt University/Edinburgh College with a Bachelor of Architecture degree.