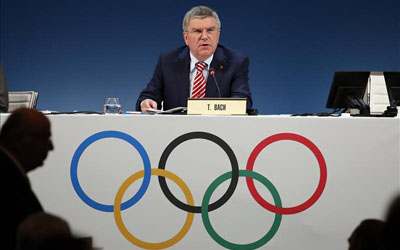 As the International Olympic Committee officially launches the bid process for the 2024 Olympic and Paralympic Games, cities around the world ready themselves for what could be one of the most competitive races yet.

Recently it was announced that the US Olympic Committee had chosen Boston as its candidate city for 2024 as it looks to host the Games for the first time since Atlanta in 1996.

But it’s not only America which is interested because South Africa, France, Qatar, Azerbaijan and many others are reported to be interested. But this hosting race will be different to others gone before as it incorporates fundamental alterations made by the IOC.

Changes emerging from the Agenda 2020 review include an overall effort to make the whole process much friendlier, the IOC keen to label it as “an invitation.”

One man casting his eye over developments is Mike Lee, head of Vero Communications.

Vero is no stranger to the Games bidding process, having successfully been involved with winning campaigns for London 2012, Rio 2016 and Pyeongchang 2018.

Looking ahead to the imminent invitation phase in 2015, Lee believed that IOC president Thomas Bach’s changes would be good for everyone involved.

“Specifically on bidding, I welcome all the changes – I think they are good,” he said. “It’s going to produce a more interactive bidding process. I think it’s going to give a greater scope to a number of cities to come into the bidding environment.

“I welcome the register for consultants and including a code of conduct. So obviously I’m a big supporter of what Thomas Bach has proposed across Agenda 2020.”

Another major feature of the reorganisation is to make it less expensive for national Olympic committees and their cities to bid. There was widespread condemnation of the amount Russia spent on the Sochi 2014 Winter Games reported to be around $50 billion, although this included non-Games infrastructure.

Nevertheless, many considered this an intimidatory reason for cities dropping out of the pursuit for the 2022 Winter Games, leaving Almaty and Beijing to fight it out to be selected as host on July 31 at the 128th IOC Session (congress) in Kuala Lumpur.

However Lee preferred to see the changes as part of Bach’s long-term project and not a scared reaction to the 2022 race.

“I think it’s bigger than that” he said. “Thomas Bach has been engaged in the Olympic world for 30 years, he’s seen a number of bidding processes. Also it’s recognising there were some issues that flowed out of, for example, the scale and the size and the cost of the Sochi Winter Games.

“But I don’t have a sense this is a kneejerk reaction to the 2022 Winter Games bidding process. No. I think there’s something broader and deeper about it.

“Also I don’t think it’s so much about the cost of bidding; if you are a bidding city, and particularly if you’re able to use it to communicate internationally, the prize is to win and become a host city.

“But cities, in my experience, are willing to invest in good quality bid processes because they can raise profiles, build new relationships, use it also to encourage investment back at home.”

There was never any danger of the 2024 Games facing the same challenges as 2022. Lee believed “healthy bidding” would have resumed even without the Agenda 2020 changes.

He said: “It’s a reminder of the fact that the summer Olympic and Paralympic Games is a fantastic prize to win. People do see the benefits of hosting, as was showed with London 2012 they and be very wide ranging including stimulus to the economy – and I think there’s still a glow around the summer Games.

“The Winter Games has a challenge and I think part of that is because it is not truly global. There’s a limited number of countries that are interested in winter sports and that can host.

“So summer bid processes have always been more exciting and perhaps international globally interesting to not just the Olympic movement but the media as well. So it comes as no surprise.”

The focus on what bids can deliver in terms of legacy and sustainability has become extremely important, so as to provide value for money which – more often than not – comes from the public purse.

That is not to denigrate the power that sponsors and partners have in delivering a Games. The IOC itself has said it will contribute $1.5bn to the hosting of the 2024 Games.

But in the past there has been some controversy over the choice of sponsors. Dow Chemical faced a backlash in London over its connection with the Bhopal gas plant tragedy in 1984. With one of the 40 approved Agenda 2020 reforms being “strengthening ethics”, Lee believed the IOC had to practise what it preached.

“If you have clauses about ethics and also against all forms of discrimination, then Yes you have to apply them and that should cut across into partners and sponsors,” he said.

So now the clock ticks down to September 15 by which national Olympic committees and their chosen city (or cities, now) have to submit their official letter of application to the IOC.

With plenty of discussions sure to take place between now and then, will Vero be involved in yet another bid?

“We’ve got a pretty good track record and so it’s very early days in terms of 2024 but naturally Vero would be interested in being a part of that,” said Lee. “But we’ll see who emerge as actual bidders and see what conversations start.”