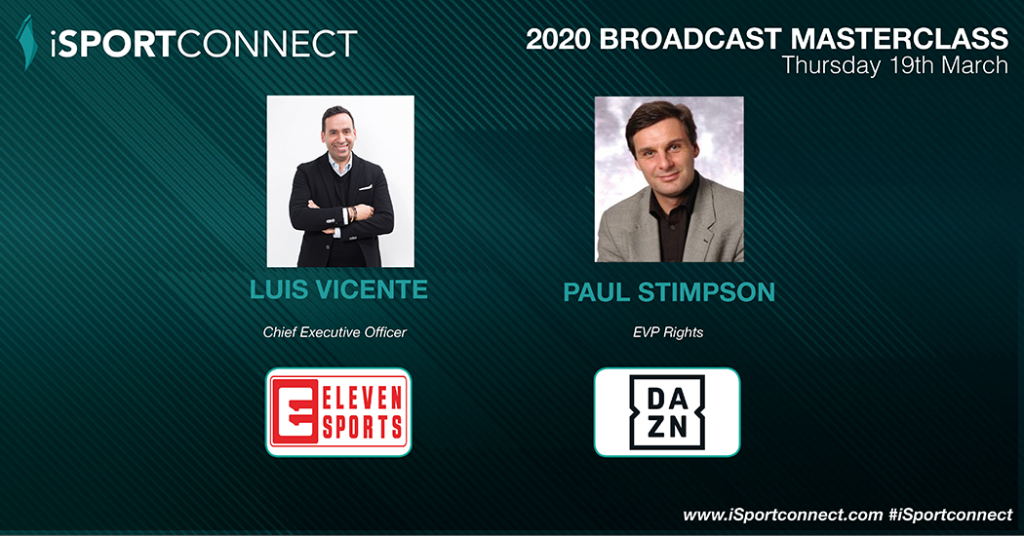 We are thrilled to reveal three more speakers for our upcoming iSportconnect Broadcast Masterclass on Thursday the 19th of March.

iSportconnect’s Broadcast Masterclass is taking place at the Chelsea Harbour Hotel in London and will explore a number of different sectors in the broadcasting space, including topics like 5G and direct to consumer models.

We will also hear from Paul Stimpson, EVP of Rights at DAZN and Alistair Gosling, Founder and CEO of Extreme.

Matt has over 25 years’ experience in mobile media and entertainment and Sport. He was voted in the top 50 most influential people in online TV for four years and in 2017 he was awarded the TV Connect People’s Choice award for the ‘Person who made the biggest impact on the connected entertainment industry’.

Within BT Sport he is responsible for developing the broadcaster’s mobile capabilities and long-term mobile strategy recently leading the team that delivered the award-winning worlds 1st remotely produced live sporting over 5G. He is also currently developing the strategy and roadmap for Augmented and Mixed Reality

As part of the wider BT Group Matt is also developing the technology strategy for the Broadcast, Media & Entertainment over 4/5G. This encompasses an end to end approach incorporating both contribution and distribution of media. He is also a member of UK5G Advisory Board representing Sport and the the Creative Industries. UK5G is the national innovation network dedicated to the promotion of research, collaboration and the commercial application of 5G in the UK

In his role as a Commercial Director OTT Patrick overseas Sportradar’s global end-to-end technology and business approach to support sports rights holders and content owners with their direct-to-consumer offering. Clients include enterprise customers such as Deutsche Telekom, Tennis channel or Onefootball as well as Federations, Leagues & Promoters such as International Table Tennis Federation or International Tennis Federation.

Patrick joined Sportradar in 2014 including prior Sportsman Media time that has been acquired by Sportradar in 2016 with the aim to grow it’s audiovisual and sports media footprint. Prior to that, Patrick was part of a four-headed founding team to create Austria’s leading platform for grassroots football. Achievements include expansion from Austria to Germany as well as opening up additional business verticals to the editorial content platform such as an online store, a magazine distributed via a regional network of media partners as well as an indoor soccer tournament with more than 2,000 active participants. Patrick holds university degrees in marketing & sales and media & communications consulting.

Frank is the GM of F1 Digital and Licensing, his responsibilities include leading product, content and business development for all owned and partnered digital properties. He also leads Formula 1 licensing business, leading growth through strategic partnerships with the likes of YouTube, Facebook, Amazon and others.

Prior to F1, Frank Arthofer was a Principal in the Tech, Media and Telcom Practice at Boston Consulting Group in LA, and previously Sr. Director of Business Development for Disney / ESPN / ABC.  Some of his experience includes developing the initial business plan for ESPN’s 30 for 30 series, developing a growth strategy for DreamWorks TV unit and launching the redesign and new business plan for YouTube Red.

To register your interest in attending the 2020 iSportconnect Broadcast Masterclass, please contact Theresa Muller at theresa@isportconnect.com

Invitation Policy: The Broadcast Masterclass is a complimentary event for iSportconnect members who are from governing bodies, sports teams, brands and broadcasters. There is no fee to become an iSportconnect member. No sports agencies, professional service providers & suppliers are allowed at our Masterclasses.