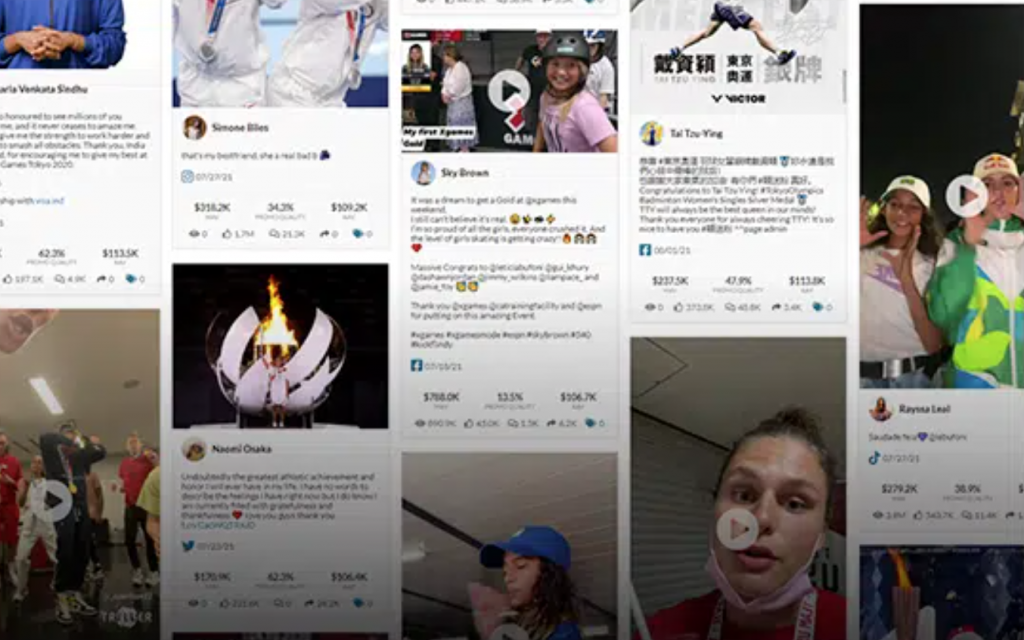 In their latest report, Hookit have delved into analysing how social performance across the unique Olympic Games in Tokyo panned out. Find out more in this new Insights piece and download the full report.

The Most Social Olympics Ever

The Olympics are over, the medals have been handed out, but the impact for brands is still being counted. For many Olympic athletes, their star shines brightest once in a lifetime or only once every 4 years. Tokyo 2020 (in 2021) was their moment to shine and shine they did. From 16th July to 15th August (a week before the Opening Ceremony to a week after the Closing Ceremony), Olympic athletes, governing bodies, and Olympic organizations posted over 230k times across social media, gaining nearly 4B interactions and video views from fans.

Here is the social media impact of the Tokyo 2020 Olympics:

Global Football, Tennis, and Basketball star athletes like Kevin Durant, Novak Djokovic, and Alex Morgan came into the Olympics with huge social followings, lifting their sports to the top of the social media followers charts. However, only one of those 3 sports came in the top 5 sports by fan engagement (likes, comments, shares, and video views).

When it comes to fan engagement, Skateboarding athletes generated the most total engagement, but Diving and Rugby athletes had the highest average engagement rate on each post.

These Games saw a breakout social star, Ilona Maher of USA Rugby, lead all athletes in terms of total fan engagement on social media, led by her massively popular TikTok videos. She was the only athlete with over 100M video views, most of which came from TikTok. Why did fans watch her videos so much? She nailed the perfect combination of relatable humor, behind-the-scenes access to the Olympic Village, and interacting with her followers. Some of her top posts were about mingling with other athletes, the infamous “cardboard” beds, and her teammates.

Here’s a look at the top 10 athletes by social media engagement during these Games:

The top 10 list is dominated by newcomers, pushing Simone Biles down to 8th place in total fan engagement on social during the Games.

Every Olympic marketing professional is familiar with Rule 40 and how it limits the ability of brands and athletes to promote their partnership during the Games. While it was eased slightly for the Tokyo Games, the general rule was that any athlete was allowed ONE social post thanking each brand they worked with for the support. Anything beyond that was restricted unless the brand was an official Olympic sponsor. As the Olympics bill themselves as a “clean playing environment” without sponsor logos everywhere in the background, the general assumption would be that any Olympic partner brand would get great exposure when they could. However, when looking at the top 10 brands by sponsorship value AAV, another story emerges.

Official Olympics sponsors made up 4 of the top 10 brands by sponsorship value during the Tokyo 2020 Games period. The remaining 5 brands are all Apparel or Equipment companies, outfitting the NOCs and Olympic athletes. Apparel & Accessories brands dominated total sponsorship value received with over $30M in AAV. No other industry received even $5M in cumulative AAV.

How did the Apparel brands do so well? Their branding on team uniforms led to a massive amount of incidental exposure. 83% of the total sponsorship value generated during the Tokyo Games came from incidental exposure. However, when examining the deliberate promotion of brands, Visa rises to the top with Comcast, Red Bull, RBC, and United all making the top 10. The partnerships these brands established paid off during the Olympics with the deliberate promotion by their athletes and organization partners. Even with Rule 40 limiting athletes to one branded post per partner, athletes still generated 69% of the total deliberate sponsorship value for brands.

To get the full analysis of the Tokyo 2020 Games on Social Media, download the attached report. In addition to diving deeper into the above data, it also covers the following:

Head to the following link on Hookit.com where you are able to download your free copy of the full report – GET THE FULL REPORT