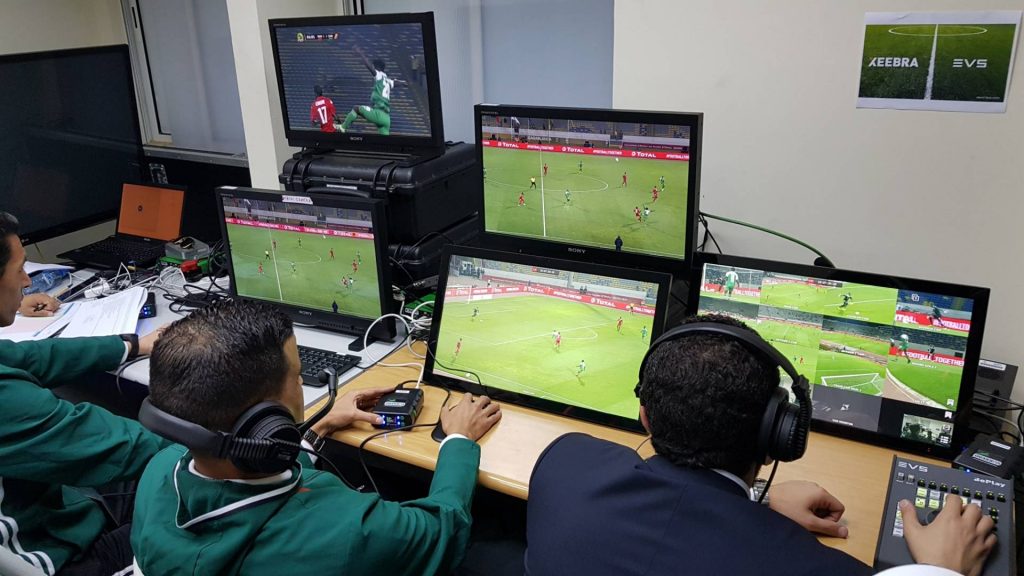 So VAR, so good? Video Assistant Referee technology has had a mixed response from the world of soccer since its recent introduction into ‘the beautiful game’. With VAR set to be used in this summer’s 2018 World Cup in Russia, leading tech firm for video production, EVS, takes a look at its impact so far.

Video refereeing decisions are causing a stir in leagues across Europe, Asia and both North and South America. Despite some criticism, more leagues and governing bodies, including Germany’s Bundesliga and Italy’s Serie A, are using video assistant referees (VAR) to improve officiating processes. The Russia World Cup this summer is the ultimate testbed of the technology that is struggling to find favour among football fans.

It’s early days but there’s no doubt that deploying VAR in the right way can bring benefits to the beautiful game, just as technology has improved decision-making in cricket, rugby and tennis.

VAR is best described as a technology-focused workflow. It has to be designed as any other video-centric infrastructure and put in place on a case-by-case basis to satisfy each league’s specific needs.

We’ve canvassed the opinions of some facility providers who currently offer VAR services, and used their experiences to evaluate how best to use the technology and how it will continue to be rolled out. Among them are Nuno Manuel Silva Pereira, project manager at MEDIAPRO, a broadcast facilities provider which deploys VAR workflows for Primeira Liga, Portugal’s top professional league.

Also offering key insights is Marcin Serafin, COO at Ekstraklasa Live Park, which provides the TV production for all 296 matches of the top Polish football league. The Polish Football Association oversees VAR use, with the company providing technical consultation and acting as the operator of the workflows with three purpose-built OB facilities dedicated to video-based refereeing.

VAR can help the referee to make better decisions in four in-game actions: goals, penalties, straight red cards and cases of mistaken identity. The International Football Association Board ruled in favour of introducing VAR in March 2016 under efforts to rid the game of poor refereeing errors in a sport where one bad decision can have a huge impact on a crunch game – or a club’s success.

Rolling out VAR brings with it questions about who should be operating the workflow. Governing bodies are responsible for VAR while a league’s officiating teams need to oversee it. But the consensus from those effectively using VAR is that a service provider with experience of TV production needs to be the one integrating and running the video officiating operation.

Pereira at MEDIAPRO says: “Operators and the technicians involved need to speak the same technical language and use the same terms as everyone in the TV compound or the workflow won’t be seamless, creating unnecessary disruptions to the implementation process and delivery of services.”

“After all, a VAR workflow is one that’s reliant on video and audio, so rolling it out with a partner that’s experienced in video production is hugely advantageous.”

How is VAR Operated?

The league or governing body should look for expertise in football officiating or of the VAR technology itself.

Having a member of the officiating team act as the operator means they’ll have a good relationship with the referee. This is useful when looking for something specific in a feed and being able to predict what their colleague would need to make a specific decision.

The drawback is that a referee may have virtually no experience of VAR technology and would need to be trained up.

MEDIAPRO’s Pereira thinks this is the best option: “The operators work for the referee, but it’s important to separate the two. I see a future where a referee can control the camera feed once the replay is selected. But this should always be done by an experienced operator.”

Serafin’s experience of deploying VAR for Ekstraklasa is similar. “Having a referee operating a VAR workflow can potentially slow down officiating workflows. They can be easily affected by events inside the stadium.”

A third-party operated VAR is another option but the referee must have confidence it will give them the best angle to help them make the decision.

Heart of the Operation

The video operation room (VOR) is where the VAR operator reviews camera feeds, creates replays and communicates with the referee. There are several possibilities.

Creating a central hub to oversee all VAR operations is similar to how the NFL uses the Art McNally facility in New York City to officiate games taking place up to 3000 miles away. With access to live feeds, a remote control room offers benefits including independence from the action in the venue, so operators can’t be influenced by factors such as a stadium’s atmosphere and noise, to intimidation from fans.

And it allows leagues or governing bodies to monitor more than one match at a time. It also means each game’s action delivers the same quality standard from a team of operators working with a familiar workflow, cutting the risk of errors or inconsistent decisions.

However, such a system can only work in countries or regions with extensively-connected and reliable fiber networks – without significant delays.

Another option is to integrate a workflow into an existing outside broadcast (OB) facility or create an entirely new one dedicated to VAR. Both create a degree of separation from the action happening inside the stadium.

An OB unit puts the operator in a comfortable position when reviewing feeds and the facility provider can also take it to the next match. For the Polish Ekstraklasa, three OB units are used by Ekstraklasa Live Park. They can cover eight games each weekend.

Troubleshooting is easier, too. If connections fail between a remote VOR hub and the stadium, it’s much easier to diagnose when located in a TV compound.

On-site VOR is also possible inside the stadium – a broadcasting suite, in a control room or even on the sideline. The operator will communicate with the referee on the pitch, but also has a view of the live action. This gives operators more context around an incident when reviewing camera feeds. It can also improve communication between operator and referee.

The downside of being inside the venue is that the atmosphere can easily affect the bias of an operator.

Football’s governing bodies and fans want minimal interference with the game but the right decisions – it’s about striking the balance between speed and accuracy. The number of cameras deployed can have an impact on the VAR workflow’s ability to operate quickly. Do more camera angles equate to more accuracy?

Serafin’s team at Ekstraklasa Live Park receives all of the camera feeds available to TV production crews: “It’s difficult to say how many cameras are enough, but adding more will allow TV productions to create better live football games and give VAR operators the best chance of seeing everything on the field.”

Operators acknowledge that it is incredibly important. It’s a question of broadcast-standard vs proprietary technology.

Some systems built on respected broadcast-standard technology can be smoothly integrated into TV workflows, easily operated by experienced users and installed by any number of facilities providers.

Proprietary systems require much more attention from the vendors when being installed or when any changes are made. Many recent high-profile incidents that have sparked questions about the value of VAR have occurred when one of these systems is at the heart of the workflow. Deploying fixed, inflexible systems rather than an operational workflow isn’t the ideal scenario, according to users we canvassed.

A proprietary system requires more staff and more extensive training and also cannot be integrated as well into TV workflows.

Many commentators have recently bemoaned the lack of a viewpoint for supporters in the stadium and at home.

The VAR decision-making process can even be used as a storytelling tool. Fan engagement through wider distribution of video content on social media platforms is a trend that’s grown exponentially in live sports. It makes sense that output from a VAR should be shared as well.

It’s clear that governing bodies, leagues and teams now better understand the importance and impact of technology in live football. Ultimately, there is no one-size-fits-all VAR. Adaptability is key.

EVS is iSportconnect’s official broadcasting technology partner. To read the white paper on VAR in full, please click on the link below: https://evs.com/en/reference/live-video-assistance-white-paper

White Paper: How Covid-19 Is A Chance For Media Industry To Transform…

SAP White Paper on Re-imagining your business with Event Ticketing

Pivot Sport White Paper on European Football in the US