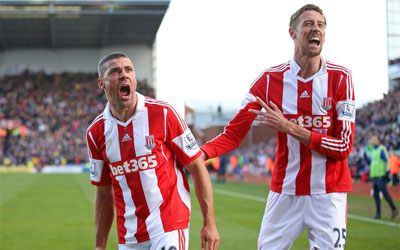 The three-year partnership deal will commence at the start of next season with SKINS supplying base layer garments to the Club’s first team and Academy players and staff.

“We are always looking to innovate and create new partnerships at Stoke City and we believe this will be the first partnership of its kind in football, giving us a competitive edge in the industry,” said City’s Head of Commercial Andrew Billingham.

“We believe there are three important layers to any professional athlete – the body which trains and eats the right nutrition to improve performance; the compression layer that helps reduce muscle damage by increasing circulation of oxygen to the muscles and the top layer which is traditionally the Club’s identity but has technical and lightweight fabrics to aid performance.

“We were delighted to conclude negotiations with SKINS several months ago and are looking forward to the players wearing their products from the start of next season and making it available in our stores for fans to purchase.”

SKINS General Manager David Ling added: “This is a tremendous opportunity to be involved with one of England’s premier soccer clubs and one whose fanbase and general visibility stretches across the entire globe. The Premier League is a truly global product and Stoke City’s association with historic names such as Sir Stanley Matthews and Gordon Banks, together with the international status of its current squad, reinforces our presence in the world’s most popular team sport.”