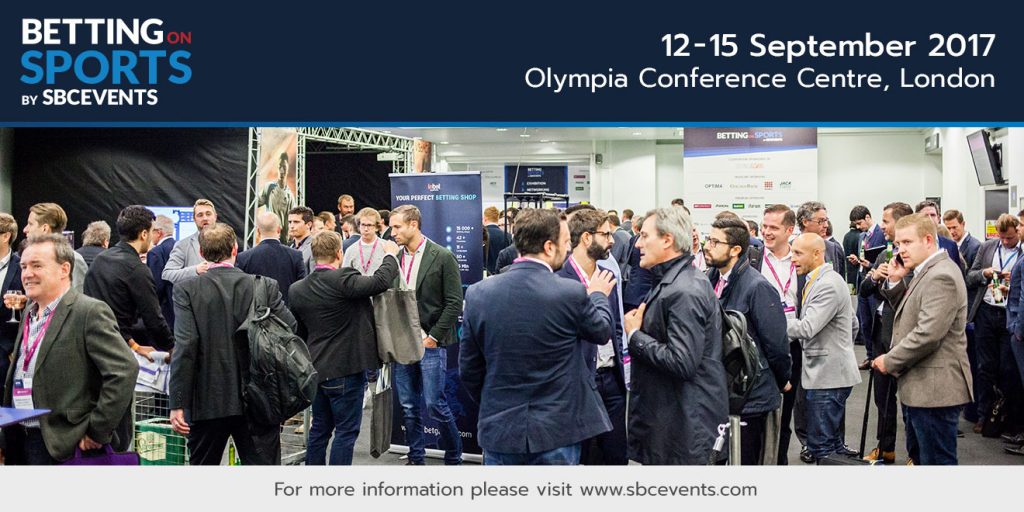 A record number of delegates, exhibitors and top-level industry speakers attended the second edition of the Betting on Sports conference, held 12-15 September at the Olympia Conference Centre in London.

There were more than 1,300 registrations, a 100% increase on the number for the inaugural edition of the event and a 30% increase on attendance from this year’s biggest ever Betting on Football conference at Stamford Bridge.

This total featured representatives from more than 140 operators, 100 suppliers and 75 top affiliates, alongside 75 sports club executives and a 5% share of both regulators/compliance staff and payment providers. All delegates were sent a post event feedback form, with 96.3% of respondents so far indicating they would recommend Betting on Sports to a colleague.

Richard Gale, UK General Manager at Catena Media and a key speaker on the future landscape for sports betting affiliates, said: “The Betting on Sports conference was great, and it was a true pleasure to speak at the event. I thoroughly enjoyed it, with some great contacts/business coming out of it. Normally very sceptical of industry events to be honest, but this was the first time I’ve left wishing I’d spent more time at one!”

John Caldwell, Partner at Narus Advisors and moderator on the US Sports session at last week’s event, added: “This may have been the best gambling conference I’ve ever been to. Well thought out and with some scale – but not to the point where you get lost wandering through the aisles. The whole thing looked terrific, well done!”

Andreas Bardun, Head of Sports for LeoVegas and a panelist on the tennis session, said: “The best thing was this was a serious discussion and debate about the issues. No one in my panel had a hidden agenda with trying to sell something. I was proud to be part of panels because I had debate with really knowledgeable people.”

Running concurrently with the conference sessions, the lively product display and networking space was subjected to a 200% increase from 20 to 60 exhibitors, with 25 first-time exhibitors including Mr Green and SBTech, alongside returning sponsors such as OPTIMA, Golden Race and HiPay, who also provided headline sponsorship for the first official networking party at Altitude 360.

Located on the 29th floor of Westminster’s tallest building, Altitude 360 welcomed around 600 of the #boscon2017 delegates to enjoy its 360-degree views of the UK’s capital city, while Under the Bridge, a nightclub positioned underneath Stamford Bridge, picked up the baton to host the event’s successful closing party on Thursday 14 September

Pinnacle CEO Paris Smith commented: “The best week spent out of the office this year, and the most impactful networking opportunity in the industry.”

SBC Managing Director Andrew McCarron concluded: “The record level of attendance for Betting on Sports 2017 is testament to the growth of SBC Events and the support we receive from the entire sports betting industry. We were delighted to combine a lively exhibition area with the most comprehensive agenda the sector has ever seen. The hugely positive reception has given us great confidence in our planning for both next year’s event and the biggest ever Betting on Football from 20-23 March.”