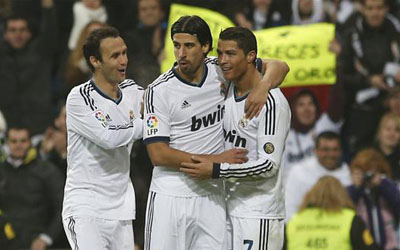 The Deloitte Football Money League has revealed that Real Madrid are the highest-earning club in football for the eight successive year.

Speaking exclusively to iSportconnect, generic Adam Bull, Senior Consultant at Deloitte said Real Madrid surpassed the €500m mark due to the team’s strength, on and off the pitch: “On the pitch they won La Liga in 2011/12 gaining 100 points in the process, a feat that has never been achieved by any Championship winning side in any of the ‘big five’ European leagues – attracting an average league attendance in excess of 71,000,  and reached the semi-finals of the UEFA Champions League.

“This run in the Champions League, and the individual selling of broadcast rights, led them to generate the highest broadcast revenue of all the Money League clubs, €199m.

“Additionally, their popularity amongst fans across the world allows them to attract high value commercial deals and to play in lucrative friendly matches in places such as the US, China and Kuwait.”

English Premier League champions Manchester City are the big movers from last year and are closing the gap on the teams above them. City are seventh in the table, behind Madrid, Barcelona, Manchester United, Bayern Munich, Chelsea and Arsenal.

Borussia Dortmund also moved up the Money League by five places, into 11th. The Bundesliga club produced €189.1m ($251.9m) in revenue, after successful years domestically and in the Champions League.

Inter Milan, Schalke 04 and AS Roma were the clubs to drop the furthest, with all three teams dropping four places, to 12th, 14th and 19th respectively.

The only newcomer was Newcastle United, who broke in to the top 20 by making €115.3m ($153.6m). The club were in the top 20 previously, but not since 2008. They replaced Valencia who were the only team to move out of the list, based on last year’s table.