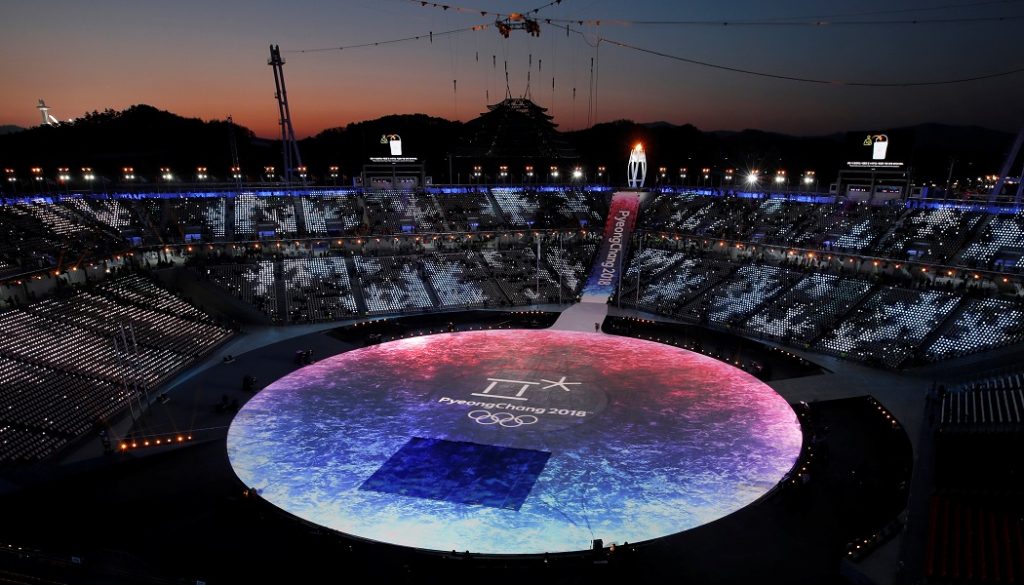 PyeongChang was the Disruptor Games with the X Peace Factor

The Olympic Games can occur at critical junctures in world history and in the history of host cities and nations as well as the Olympic Movement.

These include the Mexico Olympic Games, at the turbulent end of the sixties revolution, and the Black Power salutes – dramatic arm and hand gestures of protest that connected the Olympic Games and sport with politics and social change in popular culture forever, with saluting black US Games athletes seeking to highlight racial inequality, and asking ‘if not at the Olympic Games when the whole world is watching like a moon landing, then when.’

Fifty years on, the Olympic Movement reached another critical staging post in PyeongChang and in world and sporting history on the nuclearised Korean Peninsula – and again another hand gesture, extended this time in peace rather than protest, has defined the Games.

With large amounts of national time, pride, resources and infrastructure spent on wooing the world and securing the Games from possible nuclear fallout from the North’s missiles, and following previous Games that suffered cost blow outs and failed to realise meaningful legacies, failure was not an option in PyeongChang for either the IOC or South Korean Government.

The hand shake between the President of South Korea and sister of the North’s dictator at the opening ceremony stretched out across the great political divide and decades of personal and family trauma and human rights violations that separate the two Koreas.

The overtures of peace instantly transformed pre-Games doomsday scenarios of a winter of nuclear discontent and missiles to medal tables and tallies and set the stage for the ‘Peace Games.’ PyeongChang was also the ‘Disruptor Games’ and significantly advanced the IOC’s Agenda 2020 reforms.

Following a string of scandals in world sport, the PyeongChang peace pact re-energised and re-connected the Olympic Movement with its core values and purpose of promoting peace through sport.

Most importantly, PyeongChang provided the circuit breaker that the IOC was looking for to promote the Games to potential future host cities. PyeongChang staged Games that operated smoothly with robust transport, accommodation and venues plans that avoided excessive Games costs controversies.

While the Olympic truce between the two Koreas ensured the safety of athletes, the ban on the Russian Olympic Committee and many Russian athletes following evidence of extensive doping at Sochi, also reassured competitors.

PyeongChang 2018 produced one of the most electrifying winter Olympic Games experiences of modern times. Like the U2 song Elevation, the athletes made spectators and viewers feel they could fly so high and elevated the Games.

Games athletes thrilled and romanced the world in extreme weather and political conditions and the Games blossomed – the intimate dancing of Canadian pair Tessa Virtue and Scott Moir resembled a very modern bridal waltz performed on ice to Moulin Rouge, although something updated from Baz Luhrmann’s earlier Hollywood interpretation of Romeo and Juliet would have worked just as well.

PyeongChang was a huge triumph for the IOC leadership and President Thomas Bach, and the South Korea President, in the midst of some of the most challenging conditions to confront world sport.

Following the extensive doping and expense of Sochi and chaos of Rio, PyeongChang put a shine back on the Olympic rings and smile on the face of Olympic supporters and athletes worldwide.

MIRACLE ON THE KOREAN PENINSULA

This was much more than another “Miracle on Ice.” This was a Miracle on the Korean Peninsula.  Anchored in the one of the coldest and most dangerous places on the planet, the PyeongChang Games was prepared in the shadows of the North’s much feared nuclear missiles, where test events for the Games were conducted not far from missile test events.

The Games landscape was filled with constant reminders of the political intrigue and danger that surrounded PyeongChang, from ice dancing routines and soundtracks entitled  “Oblivion,” “Secret Spies,” and “Ring of Death” to James Bond medleys and sudden death ice hockey shoot outs.

The Olympic Games was higher, faster, stronger, and colder in PyeongChang as athletes soared above the geopolitics of the Games, while temperatures plunged and Olympic teams embarked on a modern day expedition to conquor a new ice-age of winter sport in Asia.

Athletes pushed the boundaries of human achievement and movement to breaking point, sometimes requiring helicopter evacuations, hospitalization and surgery following an avalanche of accidents, treated with greater urgency than ever following the tragic death of Georgian luger Nodar Kumaritashvili just before the Opening Ceremony of the Vancouver 2010 Games.

With the debut of new sports like Big Air, athletes blessed themselves before jumping off mountains or launching themselves so high into the air on snowboards that a pilot’s license, oxygen mask, and air bag might be required next time along with a flight path plan and air traffic controllers before athletes are cleared to depart from the take off gates again.

PyeongChang was full of twists, turns, take offs and technical moves and tactics so precise and daring in imagination that multiple video replays were required to decide final outcomes in which lifetimes of training and competition were distilled into mere milliseconds, including a photo finish to separate skiers after 15 kilometers of exhaustive alpine tracking.

The most inspiring moments and memories of the Games however belong to a team that did not win a medal, a semi final or even an early round of competition, but became the new “Dream Team” of the Olympic Movement – the unified athletes of North and South Korea, who shared friendships and marched and competed together in unparalleled scenes on the peninsula.

As well as inconvenient allegations of human rights crimes leveled by protesters against the North over its presence at the Games, PyeongChang was also a lightning rod for crimes against sport and clean athletes.

While Germany’s surge back to the top tier of the medals table may boost community support for another Olympic Games bid, Russia’s Shakespearean slide down the table with many athletes missing in PyeongChang following extensive doping investigations marked a new low for the proud sporting superpower; a low that many hope will force the Kremlin to continue to enforce all reforms necessary for proper sports governance following Russia’s post Games return to a divided Olympic Family, with some sections said to be in denial and others feeling betrayed by Russia.

Norway showed that size does not always win out, as the small nation of just over 5 million residents topped the PyeongChang medal table – a victory that points to alternative funding models for elite sporting success, based around early childhood access to quality local school and community sporting programme – and an abundance of snow.

Athletes from other smaller nations also succeed in PyeongChang against the funding odds, including two New Zealand teenager snowboarders who, in a vision that would make iconic local Lord of the Rings film maker Peter Jackson proud, soared high above middle earth to capture their nation’s elusive first Olympic medals in decades, and joined a new fellowship of the rings.

The athletes again led the way in PyeongChang. The extraordinary skills and courage of Olympic winter athletes came into much sharper focus in PyeongChang, and a more distinctive Winter Games style and personality continued to evolve and emerge from the shadows of the much larger Summer Games.

Athletes performed at awe inspiring levels and produced a blizzard of new world and Olympic records and personal bests, almost always with humility, grace and goodwill whatever their fate or outcome. The US snowboard great Sean White spent more than two hours talking to supporters and spectators and signing autographs after his gold in PyeongChang.

The winter athletes often revealed a more humble, youthful and positive team based approach to sport and competition in PyeongChang, highlighted by Australian aerial medal contender David Morris, who, after eliminated from the final by a controversial judging decision, said he was just grateful to have had the opportunity to compete and represent his country.

PyeongChang was the Disruptor Games with the elusive Peace X Factor that re-energised the Olympic Movement and its mission to promote peace through sport.

PyeongChang advanced the IOC’s vital Agenda 2020 reforms and connected new audiences and young people with innovative Olympic sport formats like Big Air, highlighting the relevance of the Olympic brand in the current era of global and regional uncertainty, even in a geopolitical complex and dangerous environments such as the nuclearized Korean Peninsula.

PyeongChang has helped the Olympic Movement to recover from the corruption and expense of Sochi and chaos of Rio, while acknowledging that major issues and reforms like doping and Games costs still need to be addressed.

While the financial and community legacies of PyeongChang will take several years to evolve, the smooth operational delivery of these Games, low doping levels due to extensive intelligence based pre-Games testing, along with the massive positive global attention and recognition given to South Korea and current unrelenting focus by the IOC on driving down Games costs are likely to increase the number of cities coming forward to host future Games.

Above all, PyeongChang shows that sport is still one of the most inclusive, inspiring and unifying forms of human expression and activity on the planet, highlighting the relevance of the Olympic Games in contemporary times and the important role of the IOC as the leader of world sport in today’s society, despite the succession of doping, bribery and financial scandals that have plagued sport worldwide in recent decades.

While the IOC has helped to bring North and South Korea together, one of its most urgent challenges post PyeongChang is to unite the Olympic Movement and stakeholders behind an agreed strategy and plan to fight the doping monster that continues to wreck havoc in the business of world sport and governing bodies.

The PyeongChang Games, like the athletes and Korean culture and history, has shown that the impossible is indeed possible, if not permanently, at least long enough to reveal new horizons and opportunities for positive change even in dark and difficult times

The historic reunion between North and South Korea for the Olympic Games has already led to invitations for further talks between the two Koreas – and possibly even America.

As the Winter Olympic Games begins the four year journey to next host city Beijing, the long march by the united Koreas into the opening and closing ceremonies of PyeongChang may not yet be over!

Michael Pirrie is an international major events and communications adviser and commentator on the Olympic Games and major events. Michael was executive adviser to the London 2012 Olympic Games Organising Committee among other Olympic projects. He was in Durban when the IOC awarded the 2018 PyeongChang Games to South Korea and has followed preparations for the Games.