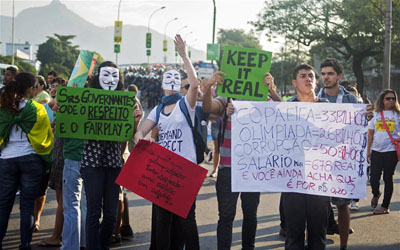 Protests continue to blemish the start of the 2013 Confederations Cup as reports of injuries continue to surface.

Reuters reports that the protests entered into the second day of the Confederations Cup, near Rio de Janeiro’s Maracana stadium where Mexico lost 2-1 to Italy.

A number of arrests were made while there were reports of injuries after police used tear gas and rubber bullets, as protesters demonstrated against the cost of next year’s World Cup.

The protests come as some locals believe the expenditure being spent on stadiums could be put to better use on education and hospitals.

A government statement said: “Authorities will not allow any disturbance of public order or any threats against the match. It’s guaranteed that fans have complete access to the stadium.”

On Friday, around 200 people burned tyres and blocked the main road outside the Estadio Nacional Mane Garrincha in the capital Brasilia.

The BBC reports that up to 1,000 Brazilians protested in the vicinity the National Stadium in Brasilia on Saturday, where the host nation opened the tournament with a 3-0 win over Japan.