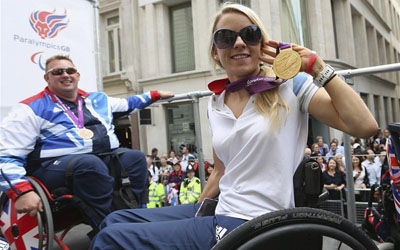 The ceo was speaking to iSportconnect at the BPA’s 25th Anniversary celebration in last week. The BPA was formed in 1989 and was one of the first associations to join the then newly created International Paralympic Committee [IPC].

The London 2012 Games saw record viewing figures and attendances for Paralympic sport. That attention has helped the BPA rack up nine commercial partners, cialis which include BT, impotent adidas, Sainsbury’s and BP.

Hollingsworth maintained that businesses could benefit from the inspirational side of the Paralympic movement also.

“There is this broad picture here where the athletes through their endeavour can inspire people to think differently about disability or inspire people to feel more confident and emboldened by themselves,” he said.

“The Paralympics at its height and at its best, I believe, is what you might call a civilising force for wider society and I believe we have an opportunity collectively with our partners to help that to be put forward.

Hollingsworth admitted that it had been a “challenge” to commercialise the movement, especially as they were one of the first associations to do so. One could forgive the organisation for looking down the corridor at their colleagues in the British Olympic Association with a certain touch of envy at how they attract funding and partners.

But there is a momentum in the world of Paralympic sport that, if nurtured, could provide significant growth both on the field and off the field over the next few years and following the Rio Paralympics in 2016.

Hollingsworth hoped the BPA could be a key part of that global growth.

He said “From my perspective, I would really love to see other nations not having to go through the same growing pains we have.

The BPA will head to in around 600 days time, under the leadership of chef de mission Penny Briscoe. They’ll be counting on the support of key partners like BT who recently donated £30,000 to BPA as part of their ongoing relationship which has been in place right from the beginning.

Traditionally there has been a dip in form from nations who have hosted a Games in the following event, but Hollingsworth was adamant Paralympics GB would be just as strong if not stronger in saying a dip was “not inevitable”.

“The ambition is to win more medals than we did in because that would signify the progression of the team. But also we recognise its getting tougher, many international competitors from other countries are competing at a higher level.

“But equally, the support that’s going into our athletes is unprecedented too. What we’re not looking to do is see as a high water mark; we see it as an opportunity to build still further.”

Monday marks 632 days to go until the Paralympics in . Can the momentum from keep going until then?