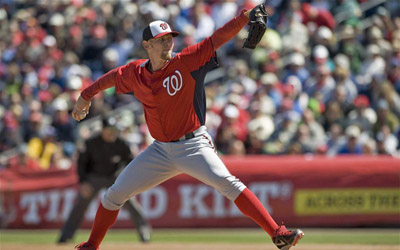 The deal grants Panini America the exclusive rights to produce autographed trading cards of Strasburg, a 15-game winner in 2012 who led the Nationals to the NL East title and their first postseason berth.

Panini America’s first Strasburg autograph cards will appear in the April release of its MLBPA-licensed 2012 Prizm Baseball product and will feature Strasburg in his USA Baseball uniform. Panini America is the official and exclusive trading card partner of USA Baseball.

“Stephen Strasburg is one of the most dominant pitchers in the game today; and one of baseball’s most popular and collected players,” said Panini America CEO Mark Warsop. “His exclusive presence in our licensed MLBPA trading card releases is a huge development for us and will add even more excitement to our roster of products. We’re honored that Stephen has entrusted us – exclusively – to represent and protect the integrity and collectibility of his autographed trading cards.”

“I’m excited to announce my relationship with an innovative company like Panini and deliver my autographs to baseball collectors exclusively in Panini trading card products,” Strasburg said. “I’m looking forward to working with Panini and joining the ranks of their other exclusive athletes for trading cards.”