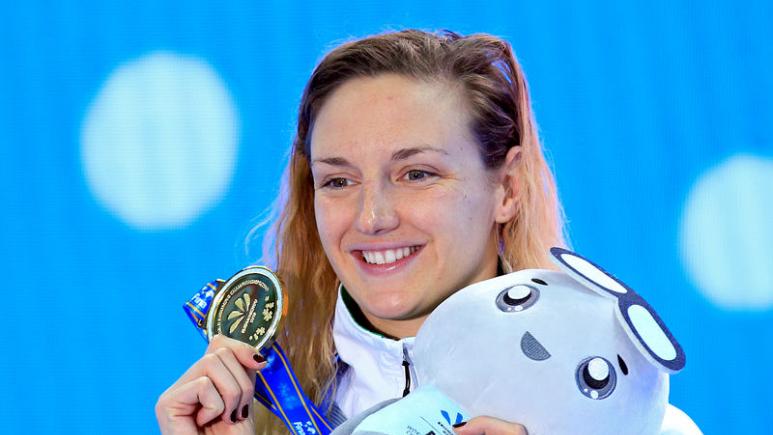 Olympic Star Hosszu: “We Want Swimming To Be A Big Pro Sport”

Olympic swimming star Katinka Hosszu is fired up about the launch of the new International Swimming League pro series this year,

Hungarian triple gold medal winner in the Rio 2016 Games said swimmers have had enough of the sport appearing on the global stage just once every four years at the Olympics and believes the time is right for a radical new approach.

Hosszu, 30, has put herself at the forefront of the ISL and its battle with the sport’s governing body FINA.

The ISL, backed by Ukrainian energy businessman Konstantin Grigorishin, will start in October and feature eight teams from Europe and the U.S with matches on both sides of the Atlantic.

The new league tried to hold an event last year in Turin but that was cancelled after FINA said it was “non-approved”.

Following legal action in December from ISL and a group of swimmers including Hosszu, FINA acknowledged in January that athletes were free to compete in events staged by independent organisers.

“It was very interesting how it unfolded, ISL never wanted to be aggressive with FINA, we don’t want to take FINA’s place, ISL wants to create something new, to be in a parallel universe with FINA and they didn’t allow ISL — they didn’t have the right to do that. But at the end of the day, they settled and ISL can start,” Hosszu said.

Hosszu, also owner of the ‘Team Iron’ squad, a role she is relishing.

“I am recruiting swimmers now, it is super-exciting because I am in the pool but I am also talking to swimmers, as a club owner,” she said.

Hosszu, nicknamed the ‘Iron Lady,’ said FINA had failed to develop the sport in a way that allowed swimmers to maximise their earning potential and branding opportunities.

“Before it was simply FINA decided and that was that. FINA was the one that had all the control and we just did what was available to us,” she said.

“We want to change the fact that we are only seen worldwide during the Olympics. We don’t only want to be looked at as swimmers without a personality just with a flag on the cap.

“Cap and goggles and where you are from – that is all you get. It can’t be that exciting to watch if you don’t know the person.

“That is what we are also really trying to do with ISL – create content, show behind the scenes, we are creating a season, it’s not just one race.”

The long-term aim, says Hosszu, is for swimming to have a constant presence that allows competitors to build global profiles similar to those enjoyed by other sports.

“The IOC (International Olympic Committee) probably wouldn’t like me saying this, but (the aim is) becoming such a professional league and generating so much money and viewership that the Olympics will be one of the swim meets, like for basketball and tennis. That’s my vision.”

With so much business to attend to, the question arises as to whether Hosszu can find the motivation to continue competing at the highest level.

She has no doubts.

“For me, the better I am in the pool, the louder my voice sounds and I can use that. For me it just gives so much motivation,” she said.

“Rio it was a very personal, goal of me breaking the world record and winning the golds and declaring that I am the best and showing myself that I did it.

“I want the sport to change. When I get out of the pool for good, I want to look back and say, that was really cool because changes happened because of me,” she said.

Not that she has retirement on her mind.

“I have a limited time in swimming but I am not saying that it is going to be Tokyo. I am already thinking about 2024,” she said.

Amid the business projects, legal cases and her own training, Hosszu has also had to deal with the split with American ex-husband and coach Shane Tusup.

“Going through a divorce is already hard. Going through it with a business partner and a coach where everything is built up, our work together, that is definitely tough and it was a hard time last year.” she said.

“I feel better than before. It is true when they say that hard times make you tougher and that you can deal with anything that comes your way,” she said.