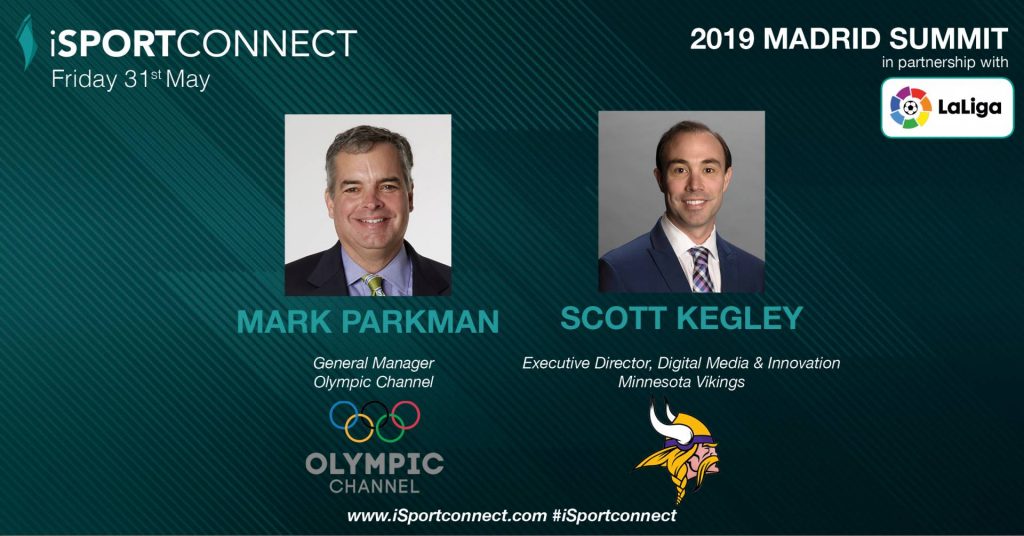 iSportconnect is pleased to announce that Mark Parkman from the Olympic Channel and Scott Kegley from the NFL’s Minnesota Vikings will be joining us at our 2019 Madrid Summit. To be held on Friday 31st May, the day prior to the highly anticipated UEFA Champions League Final hosted at Atlético Madrid’s Wanda Metropolitano, this event will kick off iSportconnect’s Global Event Series.

Before joining OCS, Mark served as the Operations Executive for Olympic Broadcasting Services (OBS) and Vice-President of International Sports Broadcasting (ISB), where he oversaw the operations of the host broadcaster for the Olympic Games. He was awarded an Emmy for his work on the host broadcaster team for the Olympic Winter Games Salt Lake City 2002, and he recently managed operations for 1,800 hours of televised competition for the Olympic Winter Games Sochi 2014, overseeing production, engineering, logistics, planning, crewing and broadcaster relations. Mark previously worked in marketing, public relations and international television coordination with Turner Broadcasting System and Cohn & Wolfe, where he led media efforts for the NFL, NBA, MLB, NASCAR, PGA Golf.

Entering his fifth season with the Minnesota Vikings, Scott oversees all aspects of digital media, social media, mobile strategy and online editorial content. Under Scott’s leadership, the team has created several innovative digital content campaigns, winning two Shorty Awards and one Webby Award. With a unique approach to digital storytelling, the Vikings consistently rank in the top quartile in content engagement amongst NFL teams. The Vikings mobile app is a pillar of the team’s digital ticketing and fan experience initiatives at U.S. Bank Stadium. Prior to joining the Vikings, Scott spent nine seasons with the San Francisco 49ers as the head of their social and digital team. Scott was named to Leaders Under 40 Class of 2017.