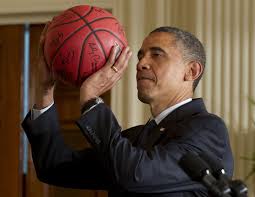 Former U.S. President Barack Obama is expected to have a key hands-on role in a new African professional basketball league, backed by the NBA and FIBA, scheduled for launch next year.

The Basketball Africa League, featuring 12 teams from the continent, is slated to tip off in January 2020 and will be the NBA’s first collaboration to run a pro sports league outside of North America.

A qualifying event in Africa will determine the make-up of the 12-team league. No more than two teams from one country can qualify.

The announcement was made on Saturday by NBA Commissioner Adam Silver and FIBA Secretary General Andreas Zagklis at the NBA All-Star 2019 Africa Luncheon in Charlotte, North Carolina.

Silver stated: “The Basketball Africa League is an important next step in our continued development of the game of basketball in Africa. Combined with our other programs on the continent, we are committed to using basketball as an economic engine to create new opportunities in sports, media and technology across Africa.”

Zagklis said: “It’s a huge joy to see our partnership with the NBA enter uncharted territory as we work together for the first time to maximize the potential of professional basketball in Africa. This is a natural extension of what we have done through the joint initiative that is Basketball Without Borders which helps find, develop and nurture young talented players all around the world, including in Africa.”

“The Basketball Africa League will enable us to build on the solid foundation laid by FIBA Africa and relaunch the continent’s club competition to offer the ultimate platform for the very best clubs and players.”

Obama appeared on a video at the announcement and said, “Through sport, if you put in effort, you will be rewarded.”

Silver said Obama’s role has yet to be determined, but the former president wants an active role.

He said: “Mark Tatum and I had the pleasure of spending several hours over the past few months with President Obama, and we all know how much work he has been doing in Africa and what a fan of the sport of basketball he is. He has said ‘I want to be directly involved with these activities in Africa.’ He understands the economic opportunities in Africa. He’s personally a huge fan of the game, and in fact dedicated a court there recently with Masai. So, while we’re still talking to him in terms of exactly what his role is going to be, we know he’s going to be directly involved in our activities there as well.”

Bilé said: “This is a historic day for FIBA Africa and basketball on our continent. We’re excited to work closely with the NBA to develop and put in a place a professional league like none that we have ever seen in our region before. Through the Basketball Africa League, we can provide the many great clubs and players with the best possible environment to compete for the highest stakes.”

“The implementation of this league is also vital to our young up-and-coming players in Africa as it gives them something to take aim at: they can look at becoming players who can play and evolve in these competitions, right on their continent.”

NBA partners Jordan Brand and Pepsi have already indicated that they want to be involved with the new league.