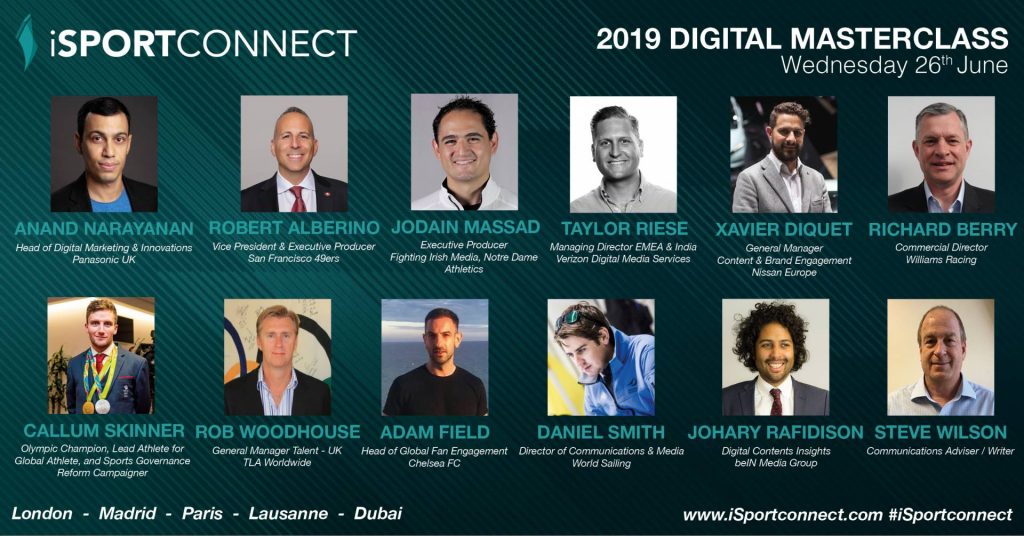 iSportconnect is delighted to announce that Jodain Massad of Notre Dame Athletics, Johary Rafidison of beIN Media Group, Taylor Riese of Verizon Digital Media Services, and Xavier Diquet of Nissan Europe will be speaking at our 2019 Digital Masterclass, which will be held on Wednesday 26th June at the Holiday Inn, Regent’s Park in London.

The Masterclass will look at the world of digital to reach and engage with fans throughout the event lifecycle, hearing from expert speakers sharing their experiences of communicating with their target audiences. With the actual field of play action making up such a small window of fan engagement, how do you keep the conversation with fans going outside of the live event experience? Given the rapid development of new technologies and channels available to speak to fans, how do brands keep up? Are your strategies to keep up with the changes robust and nimble enough while staying effective and relevant in an ‘always-on’ and competitive fan environment?

The Masterclass will also look at how the individuals within the sports universe are taking the power of social media and digital channels to speak about causes and issues affecting the world of sport, and for the very first time, we have Olympic medalists sharing their experiences and insights on their abilities to influence the very core of sport through digital.

Fighting Irish Media elevates and empowers our student-athletes, together inspiring all who behold to forever engage in the Notre Dame experience. Big stories with small crews. In 6 seconds or 60 minutes, if we can set a mood, evoke an emotion, or deliver an idea worth remembering, we’ll go there. Jodain leads Innovation, with a background in writing, shooting, designing, and editing. He was told to choose a job he loves, and he did just that. Jodain has achieved 25 Emmy® Awards including Director, Writer, Editor, Photographer, Audio, Graphics (2011-2018); 6 New York Festivals International Film & TV Awards World Medals (2012-2014); and 4 SVG/NACDA College Sports Media Awards (2016-2019).

Johary’s main objective is to improve the digital performance of the beIN’s content across the group. Sitting within the group analytics team, his role is to shape the best picture of how sports fans consume digital sports content through data. Working in tandem with the producers and online publishers, he shares his insights in order to improve the digital experience of the beIN Media Group content. Prior to beIN Media Group, Johary was a digital content analyst in media (OMD EMEA), content (Grayling) and creative (AKQA) agencies working across different clients such as Nike, Xbox, Heineken, Adidas and Intel.

Taylor serves as the Managing Director, EMEA, and India, for Verizon Digital Media Services, whose next-generation platform is delivering the future of media. Taylor works out of London, UK, in the company’s European headquarters – his base of operations for the past five years since opening the company’s first overseas office. Over the past seven years, he has been responsible for a variety of industry verticals and markets, including overseeing all sales across APAC. Taylor originally joined the company as a part of Verizon Digital Media Services’ acquisition of Edgecast CDN. .

Xavier has spent the last 15 years working for the Renault Nissan Mitsubishi Alliance in South Africa, France and Spain, and has been involved in a variety of roles, mainly in marketing. In his current role, Xavier looks after all advertising, content, events and sponsorship related areas. Nissan currently sponsors the UEFA Champions League, after Xavier had the privilege of starting  negotiations with UEFA back in 2013, leading to Nissan becoming their official sponsor from the 2014/15 season. Nissan is also involved with Formula E, ICC and City Football Group, as well as working with global ambassadors such as Eden Hazard, Philippe Coutinho and Lieke Martens. This year, Xavier and his team delivered the first 100% electric Champions League Final in Madrid, providing 266 electric vehicles to shuttle UEFA guests. Xavier is also a lecturer in the E-Marketing, Mobility and Automobiles Masters programme at ESSCA School of Management in France.

Hosted by leading Global Sports Communications expert, Ben Nichols (of Ben Nichols Communications), the Masterclass will feature a maximum of 150 invite-only delegates. iSportconnect provides a media/agency free opportunity to network with influential senior-level sports business executives. We are famous for our intimate and relaxed environment, encouraging ideas exchange and helping to introduce you to the right new connections.

To register your interest in attending the 2019 Digital Masterclass, please contact Chloe McCombie at info@isportconnect.com

Invitation Policy: The Digital Masterclass is a complimentary event for iSportconnect members who are from governing bodies, sports teams, brands and broadcasters. There is no fee to become an iSportconnect member. No sports agencies, professional service providers & suppliers are allowed.