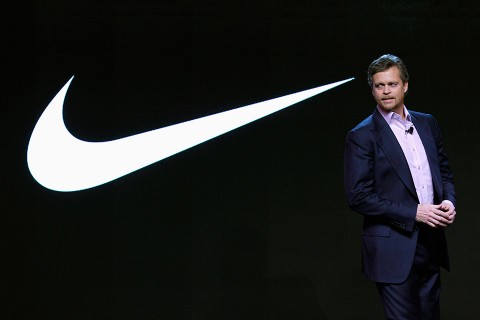 Nike CEO Mark Parker made an ambitious promise during an investor presentation day in October 2015 to make $50billion revenue by 2020, which would be a huge leap considering that the total revenue for the fiscal year was $30.6 billion.

From where Parker was standing the company was then at an ‘all-time high’. “It’s clear that Nike is a growth company,” he insisted.

Since Parker made the ambitious forecast, Nike’s stock is down 17%, equating to $22billion (£16billion) in market value. Its Sales growth has also been slowing down, to just 0.1% in the last quarter.

“It went from a company with all these tailwinds and firing on all cylinders to having headwinds and not firing on close to all cylinders,” said Brian Yarbrough, an analyst for Edward Jones, to Bloomberg. “They are going to have reset expectations.”

From the streets to the league, it’s about hustle, confidence & style at every level. #wantitall pic.twitter.com/tUZTaLCqar

Nike told investors that revenue will grow via a high single digits rate over the next five years. Earnings per share will gain at a mid-teens percentage, the same as projected in 2015. Analysts polled by FactSet currently expect Nike to post $40.9billion (£30billion) in sales by 2020.

“Fuelled by a transformation of our business, we are attacking growth opportunities through innovation, speed and digital to accelerate long-term, sustainable and profitable growth.”

Nike will keep investing in digital and direct-to-customer channels as the retailing landscape has changed.

With retailers like Sports Authority and City Sports going bankrupt and liquidating, Nike condensed its retailing partners to 40, including brick-and-mortar standbys like Foot Locker and Nordstrom, new partners like Amazon.com Inc., luxury e-commerce brand Farfetch and Chinese social media platform WeChat (with a user base up to 1 billion), on new apps and in-store experiences.

According to Bloomberg, Nike currently gets 40% of its wholesale business from what it calls “differentiated” retailers, and it plans to push that to 80% by 2022, which means more products going to specialty stores on athletic apparel and footwear like Foot Locker. Nike said it is rolling out a program later this year at Foot Locker to promote sneaker hunting across the chain’s stores and online.

Also covered by Bloomberg, Nike will stop selling to some wholesale accounts that it says don’t do a good job of presenting its products. The company did not release the names of those retailers.

But President of Nike Brand, Trevor Edwards, made it clear that “undifferentiated, mediocre retail won’t survive”. He added: “We will be shifting away from this over the next five years.”

Digital Channels would be an ideal path for Nike to shift away. Nike aims to grow digital sales from 15% of revenue to 30% over the next five years, a figure that includes both direct and partner e-commerce sales.

With this new programme, consumers will have first access to the latest products, exclusive access to personalised services and experiences, plus reserved products for members only.

In September 2017, Nike rolled out its NikeConnect App with NBA. This is like a basketball fans’membership programme, with all the products and services that they individually desire.

With the outline above, Nike unveiled its five measures of success that reflect the operational drivers of Nike’s long-term financial model and will guide its investment approach over the next five years. These five measures are:

1. New innovation platforms are expected to drive over 50% of revenue growth.

2. Revenue generated from digital platforms, both owned and partnered, is anticipated to increase from nearly 15% in fiscal year 2018 to more than 30%.

3. Speed-to-market is anticipated to double as Nike reduces the overall product creation timeline by over 50%.

5. Ensure consumers in the company’s 12 key cities and 10 key countries rate Nike as their number one favourite brand.

In the future, Nike will also keep investing in global markets outside its traditional powerhouse of North America in the hope that these markets will bring 75% of the revenue growth in the next five years.

The company stated during the investor meeting that, by geography, it expected to grow North America in the mid-single digit range, Europe, Middle East & Africa (EMEA) in the mid-to-high single digit range, Greater China in the low to mid-teen range, and Asia Pacific & Latin America (APLA) in the high single-digit to low double-digit range, in each case on average over the next five years.

Nike’s new plan showed its determination to revive its growth, which seems pretty necessary given the pressure it has been facing lately.

In 2017, there seems to be nothing but dark clouds above Nike: Earlier this year, Nike announced its first major layoffs since the financial crisis. Sales in North America have declined for half a year. Total revenue grew just 0.1% during the last quarter. And in China, its biggest hope for revenue boost, Nike was accused of misleading advertising this March.

Nike’s trouble came from inside and out. First, when athleisure became mainstream, competitors like Adidas took the initiative, seizing a large crowd of consumers with their classic, retro products.

Then with fast-fashion and luxury brands joining in, sports and fashion continued to blend, but Nike found itself surrounded by emerging rivals with a unadvantageous weapon in hand; functional products.

And then retailers dragged Nike down, or vice versa. The Sports Authority and City Sports have liquidated, and sales at other traditional sporting-goods chains have slowed. The CEO of Foot Locker, Richard Johnson, even openly criticised Nike for not making its sneakers more desirable. He doubts whether Nike is still relevant to younger shoppers.

But with athleisure going downwards of late, it took a toll on the entire industry. UnderArmour is the worst-performing stock in the S&P 500 over the past year, with a 56% decline. Foot Locker Inc. followed with a 53% drop of its own.

Johnson might be on to something. Nike’s biggest problem comes from within. Their products may not be attractive to consumers like they used to be.

A survey released by Piper Jaffray showed that Nike still remains the favourite sports brand among upper-income teenagers, with 46% of respondents supporting it. But a year ago, the number was 51%. Adidas’ support doubled to 11%.

Nike can’t sit around and sigh over consumers’ unpredictable tastes. They need to clear up the storehouse.

In October 2017 in the U.S., Nike announced a 48-hour sale with up to a 40% discount on more than 200 items on Nike.com, including products from the Jordan brand.

“Nike is usually really good at reading the tea leaves, and they’ve lost their mojo. They’re more market reactive than market proactive,” Neil Schwartz, vice president of business development at SportsOneSource told Bloomberg. “I don’t know how they’re going to get themselves out of this situation.”

Make no mistake, Nike is still the number one brand in sportswear, but it’s still a far cry from where it wants to be.