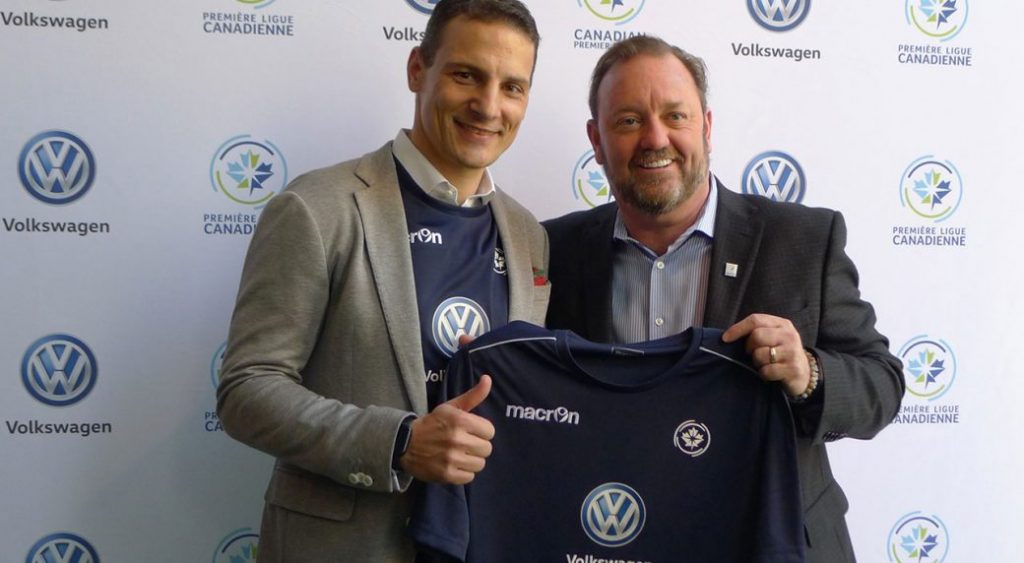 The new Canadian Premier League (CPL) kicked  off on Saturday.

The opening match between York9 FC and Forge FC ( a 1-1 draw),drew 17,611 spectators at Tim Hortons Field in Hamilton, Ontario.

Volkswagen is a founding partner of the league and will receive national promotional and media assets across the CPL and all of its seven clubs. The others are HFX Wanderers FC, Valour FC, FC Edmonton, Cavalry FC, Pacific FC.

Moosehead is on board as the Official Domestic Beer of the league.

Canada played in one World Cup, in Mexico in 1986, failed to win a game, did not score a goal and never returned to soccer’s global showpiece tournament.

Canada has not even reached the final phase of the CONCACAF region’s qualifying competition since 1998.

A thriving domestic league has long been identified as the missing link that would bring about a return to the World Cup and the latest attempt began this past weekend when the Canadian Premier League (CPL) kicked off with the stated objective of developing Canadian talent.

“This is what lights the fire,” Commissioner Clanachan told Reuters. “In Canada we have a great youth programs, we do extremely until the kids get to the Under-16 then they drop off quite quickly.

“There is nothing there for them to reach for. Now the bridge finally gets built right through.

“Now that there is this professional league coming up people see this could be the catalyst to moving us forward.”

The CPL, which has seven teams spread across four time zones, will launch on Saturday with the Hamilton Forge FC hosting York9 FC.

Victoria based Pacific FC will open their season with a 5,000 km road trip to face the HFX Wanderers FC in Halifax on Sunday.

The regular season will run from April to October and consists of two separate tournaments – the spring season and the fall season – and will culminate in the CPL Championship between the two winners.

The idea of a professional domestic league is not new.

In the afterglow of Canada’s World Cup breakthrough in 1986 the Canadian Soccer League was born the following year and ceased operation five years later.

Canada’s women have won medals at the last two Olympics and have consistently been rated World Cup contenders as they will be again this year in France.

The country hosted a hugely successful Women’s World Cup in 2015, the FIFA Under-20 World Cup in 2007 and will co-host the 2026 World Cup with Mexico and the United States.

But the men’s program has never quite got it right.

More than three decades of bungling have generated plenty of big talk with bigger plans and ideas but little in the way of results.

“Frankly, I get asked why not 30 years ago and the answer is the country wasn’t ready for it,” Clanachan said. “The country is ready for it now just because of the growth in the global game.

“The world is a lot smaller, there is a much greater appetite, immigration is what is driving this country’s growth and everybody that comes here understands the game of football but they don’t understand baseball or hockey.”

The expectation is the CPL will this time be built on a solid foundation and not the shifting sands which caused previous attempts to crumble.

The league will operate under a salary cap but Clanachan does not talk about it, saying only that salaries are in line with other more established leagues.

The initial franchise fee for the first seven teams was set at $3 million CDN while the MLS has set expansion at $200 million US.

Clanachan says there are 18 cities or regions interested in getting on board but for now the league remains focused on establishing itself.

“I’ve said all along, 14 to 16 teams makes us the right size for a Premier League for a country of our size and population,” said Clanachan, 56, who plays every week in his local league and is known for his aggressive defending.

“Personally my goal would be to get their sooner than when the World Cup comes to North America.”

In his former job as chairman of Restaurant Brands International, Clanachan helped build Tim Hortons, a coffee and donut chain, into an iconic brand that has become part of the Canadian identity.

The idea is to turn the CPL into something similar, a truly Canadian product that will resonate with fans.

Rosters will be between 20 to 23 players, with a minimum 51 percent being Canadian. Three must be Under-21 and combined they must get 1,000 game time minutes a season.

“In Canada and the U.S. we should be better than what we are on the global stage,” said Clanachan. “Part of that is how we approach the game and I think things are starting to change here.”

The new league is being realistic in terms of attendance, restricting the seating at CFL venues in Winnipeg and Hamilton. Capacity across the league will range from 5,000 to 10,000, but the opener showed that more is possible.