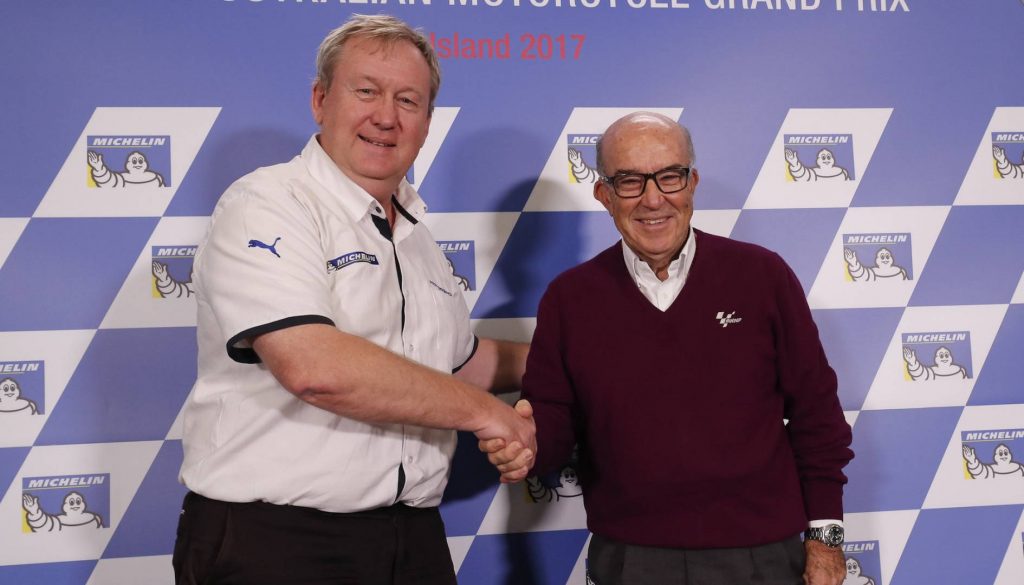 Dorna Sports announced a contract extension with Michelin that will see the French marque continue as the sole, official tyre supplier to MotoGP until at least 2023.

The five-year agreement, covering the 2019 to 2023 seasons, was announced at the Michelin Australian Motorcycle Grand Prix at Phillip Island, Victoria.

As part of the agreement, the Michelin brand will also continue to be featured trackside at each event – and will be the title sponsor of a Grand Prix.

Pascal Couasnon, Director of Michelin Motorsport, said: “After two seasons that have seen tyre performance and strategy make a real contribution to the show delivered by motorcycle racing’s premier series, DORNA Sports has decided to extend its collaboration with Michelin as technical partner and exclusive tyre supplier to MotoGP for five more years.

“We are naturally delighted to have earned the confidence of Carmelo Ezpeleta and his team. Michelin intends to use its continuing association with Dorna Sports to continue developing ever-safer and more competitive racing tyres, as well as innovations that will go on to benefit our road tyres.

“Michelin is also delighted to continue working with the teams and riders who gave us such a warm welcome back after our absence from the championship and also to be able to build on the sense of pride felt by our staff following our successful return to MotoGP.”

Carmelo Ezpeleta, CEO Dorna Sports, said: “I am delighted that MotoGP and Michelin will continue their collaboration for a further five years.

“MotoGP has only continued to grow, excite and thrill fans since Michelin came on board as sole tyre supplier in 2016, and we are proud that our partnership will once again form the foundations of a further five years of stunning racing. This is fantastic news for the Championship, teams and riders as we look to the future.”