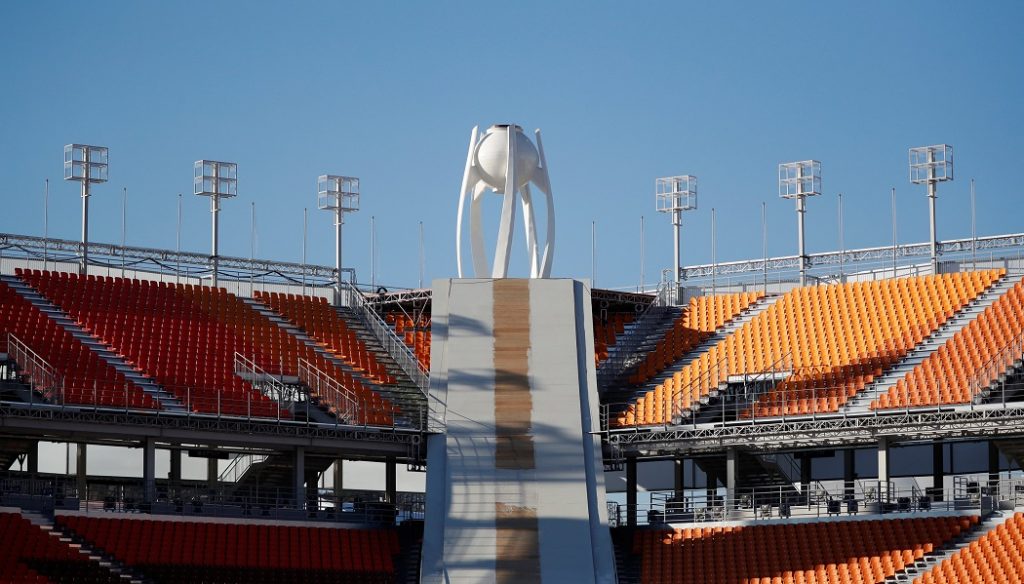 The meeting of the two Korean delegations on the politically and geographically divided peninsula in an isolated demilitarised zone under satellite surveillance to discuss Olympic Games participation, in the shadows of nuclear missile launch sites, was as surreal as it was real.

The Olympic Movement’s year of living dangerously in 2018 has commenced in dramatic style, in settings and locations of political intrigue and danger that would even challenge Olympic secret agent James Bond following his work on the London 2012 Games.

With the threat of nuclear attack and counter attack continuing, the stakes could hardly have been more urgent, heightened only further as national leaders around the world contemplated their options in the final countdown to the South’s Winter Olympic Games in Pyeongchang, including possible withdrawal of teams for safety and national security.

While the location of the meeting may have revived memories of Bond’s North Korea military mission in Die Another Day, this latest Olympic scenario might have seemed more like Mission Impossible.

The meeting was also one of the most dramatic and unusual in recent Olympic and world history. The outcome of the meeting, in one of the most dangerous places on earth, as unexpected and improbable as the setting itself.

After threatening nuclear war for months, North Korea met with its rival neighbour and agreed to send a team to the South’s Olympic Games in a sudden and dramatic move that brings the isolated state in from the cold and into contact with the nations and territories of the world-wide Olympic Movement.

The Olympic Games deal provides vital extra time for possible further discussions behind the scenes at the Games and other forums, and has eased global tensions and fears.

There was no exchange of political prisoners, suspected spies, or kidnapped activists, academics or residents this time – just an exchange of views about the potential benefits and opportunities from participating at the South Korea Games, and most likely some preliminary discussions about issues and protocols relating to security, travel, accommodation, and visitor contact for the North delegation while attending the Games, which the IOC and South Korean government officials will now organise.

The Olympic Games has been a special event for the Koreas, uniting North and South previously and most visibly at the Opening Ceremony of the Sydney 2000 Olympic Games.

GAMES AT THE EXTREMES

The recent meeting between the two Koreas in such extreme circumstances nearly 20 years later was of itself a major political achievement in international sports diplomacy – an outcome that had eluded the best efforts of the world’s superpowers and leading international relations organisations, including the United Nations.

It seems inevitable however that former UN Secretary General, South Korean diplomat and current IOC Ethics Commission leader, Ban-ki Moon, played an important role in the diplomatic coup, along with IOC president Thomas Bach, who, like a predecessor, Juan Antonio Samaranch, has worked hard to develop trusted relationships with world leaders and heads of state and institutions from the Vatican to the Kremlin, White House and beyond.

These networks and back channels provide a hidden scaffolding for international communication, intelligence and influence for the IOC and Olympic Movement that can be activated by Olympic stakeholders and national committees in times of difficulty.

The outcome of the dual Koreas meeting provides a dramatic new narrative for the Pyeongchang Olympic Games and the Olympic Movement.

The Koreas deal changes just about everything, and shifts the focus of the Pyeongchang Games from the all consuming Russia doping scandal and ban back to the Games as a catalyst for more peaceful relations and change as envisioned in Pyeongchang’s emotional final presentation to the IOC to host the Games seven years ago – in line with the vision of modern Olympic Movement founder, Pierre de Coubertin, who believed that sport could bring nations together in friendship and diminish fighting and war.

The landmark Koreas meeting has secured a moratorium on military exercises in the region with the agreement of South Korea and the US, and allows North Korea to participate in the Olympic Games and halt nuclear missile testing during the Games period – in effect setting the scene for an Olympic Games truce or peace deal that just days ago seemed impossible.

While sceptics may highlight the failure of the meeting to persuade the North to abandon and surrender its nuclear weapons, this was never about decommissioning the missiles or dismantling nuclear launch pads, which remains the long game.

Indeed, the international campaign of sporting sanctions leveraged against South Africa to dismantle apartheid took several years to reach a critical mass of support for political change, prompting the late South African prisoner and president Nelson Mandela to ask on his release from custody if the great Australian batsman Don Bradman was still alive

While the historic North-South meeting has generated endless speculation about the motives of the parties involved, the most important legacy from the meeting is that the Olympic Games has emerged as an item of major interest for the reclusive North Korean leader, and provides a much needed focus for the international community to engage the North Korean leadership moving forward.

The North Korean leader has also studied the important role the Olympic Games has played in helping to build and advance the nations, infrastructure and image of former Asian Olympic host countries, including Japan, China, and South Korea in 1988.

The return of the Olympic Games to Tokyo and Beijing again over the next four years provides important opportunities to further involve North Korea in these and other Olympic projects in the region.

While little is known about the North Korean dictator’s sporting interests – the North’s media once broadcast to the population that the North, despite not qualifying, had won the Football World Cup – the North’s leadership now has a much greater understanding of how the Olympic Movement, which has more member nations and territories than the United Nations, can provide a unique showcase for the country and its leader, a high priority for the dictator.

North Korea may have never won an Olympic gold medal, but it has delivered a highly accomplished and well choreographed performance in these high level Olympic talks with the South.

The surprise outcomes from the meeting of the two Koreas have again lifted hopes in the international community and especially among Koreans for a resumption of the reunion process for the many families shattered by the Korean war, the emotional wounds and suffering from which remain highly sensitive.

Coming just several days after Christmas and more than 100 years after a series of unofficial ceasefires during which soldiers played games of football along the Western Front in the famous World War 1 Christmas truce, the Koreas have formed a modern day truce around the Olympic Games.

The truce may be fragile and temporary and built on conflicting national and international goals and agendas, but its mere presence is a powerful demonstration of the potential role sport can play as the hidden peace maker and diplomat in divided regions and countries.

FAILURE NOT AN OPTION

The success of the Korea talks was vital for the IOC given the time and infrastructure invested in the Pyeongchang Games, which was awarded to the host city on its third bid attempt.

The IOC also needs the Korea Games to proceed smoothly to show that even in such a geopolitically complex and high risk regional environment, the Games can be successful, easing the concerns of potential bid cities about security and related Games costs in such unstable times.

As long as the North attends and the unofficial truce holds, the safety of thousands of the world’s best athletes, spectators and officials will be ensured for the Olympic Games. The real hope however for this skilfully and secretly negotiated settlement must be that any resumption of the reunion programmes for war displaced and separated families will remain in place after the Games have ended.

This is needed to achieve a more peaceful if not united Korean Peninsula.

Michael Pirrie is a London based international communications adviser and commentator on Olympic and world sports politics and news. Michael has worked in senior communications and planning positions on several major Olympic projects including the Sydney and London 2012 Olympic Games, regarded as two of the most successful global sports events in recent times.