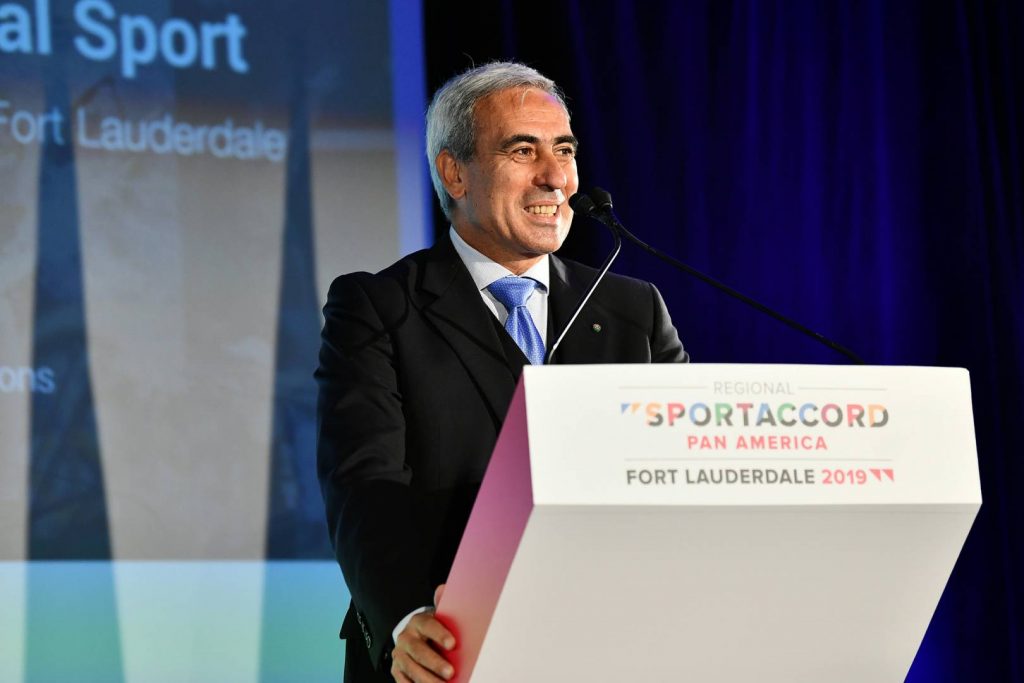 The great importance of the international sports federations is easy to understand. Each IF sits at the top of the global pyramid of its sport, running world championship events and setting standards for national federations and other stakeholders reaching all the down into the grassroots. It’s very much a top-down structure, and that is pretty much inevitable in a field activity that depends absolutely on shared rules and values.

The ambition to do something to bring stakeholders closer together has been around for a long time. The aim of SportAccord, the global gathering of governing bodies and partners under the auspices of GAISF (the Global Association of International Sports Federations) is to do exactly this. But that event, the world’s biggest and most important gathering of the Olympic Movement, is largely about the top of the pyramid.

“We as sports leaders need to bridge the gap between what’s happening in society in general and sport.”

Raffaele Chiulli, who was elected President of GAISF last year, and is also President of SportAccord, has moved swiftly to expand the purpose of the latter to improving the connections between the various levels of sport governance and the business, particularly between the IFs and national governing bodies and other national stakeholders.

Chiulli, who has been President of the UIM (Union Internationale Motonautique since 2007, spoke to iSportconnect about the bold initiative during the event at the Fort Lauderdale Convention Center. It attracted more than 450 delegates from all over the world and 61 IFs represented as well as various national stakeholders from throughout the Americas, event organisations, host cities and a wide range of companies.

“We’re very excited to be here on Fort Lauderdale,” he said. “It’s an amazing location, with more than 300 days of sun every year, the ocean, the beaches. It’s really a great place to host our event.”

He explained the origin of the new event as follows:

“We’ve been listening to our key stake holders, the national Olympic committees, the National Federations, the International Federations. They all wanted this event because it’s really relevant for the region and it addresses the diversity of a vast area, in language, in culture, even in the weather. From North America all the down through South America there is a common set of goals around the passion for sport and the lover of sport, and we need to work for sport on a regional basis.”

The conference discussions at the first SportAccord Regional gathering highlighted the importance of widening the dialogue throughout sport.

“We heard about how the international sports landscape is changing, deeply and rapidly, and we as sports leaders need to bridge the gap between what’s happening in society in general and sport,” Chiulli said. “We need to lead by example, in terms of good governance, and ensuring the sustainability of sport, economically, socially and environmentally. We need to ensure that the new generations are going to feel comfortable in starting new sports disciplines and practicing sport.”

“The Chinese want to show the world they are the best. There will be plenty of very nice surprises.”

More SportAccord Regional events are on the drawing board for the future.

“We believe that the formula is a success and that has been shown here,” Chiulli said. “The SportAccord Regional will certainly be repeated and it will be improved. We are humble and we want to learn from any mistakes we’ve made.”

In the meantime, preparations for SportAccord 2020 in Beijing (April 19-24) are going extremely well, he reported.

“The Chinese want to show the world that they are the best,” he said. “So it’s going to be a great event. I have personally visited to see the infrastructure and talk to the key people involved in the event, including the Minster of Sport and people at BODA (the Beijing Olympic Development Association) and the government. It’s going to be a great event. And there will be plenty of very nice surprises.”