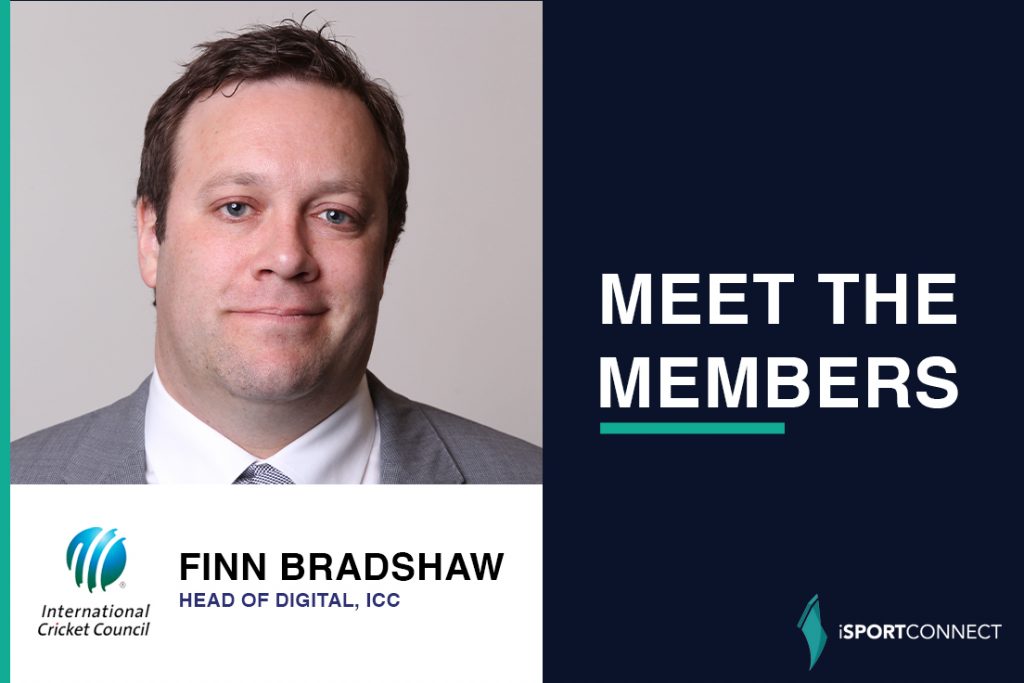 Earlier this summer, the International Cricket Council named Finn Bradshaw, formerly of Cricket Australia, as their new Head of Digital. In a time when Covid-19 is creating an even greater reliance on digital and forcing the ICC’s Men’s T20 World Cup, originally planned for later this year, to be postponed until 2022, it is certainly an interesting time to be taking up the role, so iSportconnect sat down (virtually) with Finn, to chat further about his new position.

Firstly, how pleased are you to be taking up this role with the ICC?

It’s super exciting on a couple of levels. You see some of the numbers that came out of the ICC Men’s Cricket World Cup in England last year, which are by most measures some of the biggest numbers for any event in the sports world, so to be involved with something like that is tremendous.

“We looked at how we could export our model to the world, so I’d been thinking about strategies for the global cricket audience for a while.”

But on the other side, cricket is the first sport I fell in love with, so it feels like a natural progression. The current team has been doing a phenomenal job so I’m excited to join that journey, as there’s enormous potential ahead of us in terms of what we can do for cricket as whole.

Talk us through your path to this point, why was sports right for you?

I’ve been so lucky, you can’t emphasise that enough. Everyone wants to work in an area they’re passionate about and for most of my career I’ve been paid to do something that I would choose to do anyway.

I studied journalism and my first job was covering basketball, now I didn’t get that for the three years I studied at university, but because of the 15 years of my life I’d spent watching hoops (mainly thanks to a dad who’d seen Bill Russell play at the 1956 Olympics), so sport was in my veins. Having that passion helps, it makes the extra hours not seem like a burden. I’ve also been incredibly fortunate to work under people who’ve had great faith in me.

What learnings will you take from your extensive experience with Cricket Australia and your time at Tennis Australia into the role?

Initially at Cricket Australia we were very Australia-centred, but once we felt like we’d reached most domestic cricket fans we looked at how we could export our model to the world, so I’d been thinking about strategies for the global cricket audience for a while.

One of the things I think we did well at Cricket Australia was identify gaps in the existing coverage – we felt there were large swathes of cricket fans we could serve better. We could also get people at the start of their cricket journey on social platforms where cricket hadn’t been before. I’d say that’s also true globally – it’s a fragmented experience on digital for a cricket fan, in most places there’s not one destination that gives you everything, and it varies by market. We can look to see if there’s a role for us to play and make sure fans are being served as well as possible.

From Cricket Australia – an ‘always on’ 12 months a year operation – to move to the Australian Open, where the focus was all about one of the world’s great events for two weeks and how do you re-engage people after not talking to them for some time.

Obviously, at the ICC we work with organising committees on regular global events, so the lessons from TA are applicable to the ICC.

It’s a great disappointment for all cricket fans as I’m sure to you as well that there will no longer be the ICC Men’s T20 World Cup later this year. How do you now start planning for the challenge of what will now be three major tournaments in three years on the Men’s side of the game?

It’s definitely going to be a challenge – how do we engage in the conversation around cricket when there’s not one of our own events?

“When money starts coming in for digital assets, it means you’re not just looking at how big the stats are, but driving real business outcomes, and that brings accountability.”

But the change means there will be three ICC Men’s Cricket World Cups (one one-day tournament and two T20s) in three years and that is extremely exciting. This is where cricket has a massive opportunity. We have, from the benefit of the demographics of our fan base, an audience that’s very engaged and active on digital.

What do you think have been the most key digital changes in recent years?

I’d say the biggest change is how embedded it’s become. You look at some sports organisations now, almost 50% of their partnerships are around digital assets, whereas when I started digital was the steak knives. So when money starts coming in for digital assets, it means you’re not just looking at how big the stats are, but driving real business outcomes, and that brings accountability.

In the sports I’ve worked in, India suddenly coming online through mobile has created a seismic shift – much of the Indian population almost skipped the desktop computer. Then you look at somewhere like China, and how people use mobile technology there, compared to that, in most other parts of the world, we’re playing catch-up.

The ICC has seen great digital success from last year’s ICC Men’s Cricket World Cup and the ICC Women’s T20 World Cup in Australia earlier this year, so how are you going to be building on that?

They are phenomenal numbers! So now the question is – how can we use that platform we’ve built to grow the game? It’s maybe a little bit early to say, but we have to make sure everything we’re doing on digital is supporting the sport globally. It’s constant evolution and change, you can see something like TikTok has had a huge swell thanks to Covid.

Finally, what is your favourite thing you’ve seen on social media that really stood out to you?

It’s been really interesting this period as everyone’s been stuck at home, so you’ve seen the best and worst of social media. One thing I love, there’s a sports writer in America called Shea Serrano, he may be the best in the world at Twitter.

He has a nice combination between being self-deprecating and promoting his own work, but he does these great things such as sending money out to help people in need, which drives others to do the same. Watching people respond to that, making a meaningful difference in people’s lives, I think we’re all inspiring to do something like that. I like that it’s not over-thought, but it has a real impact.