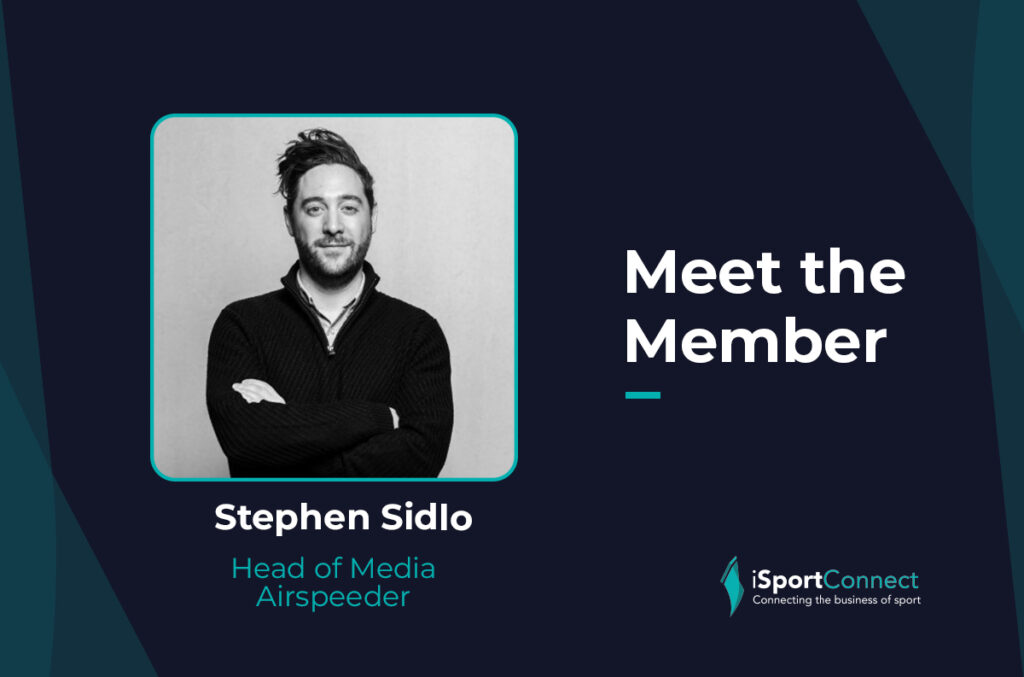 Meet the Member: “We’ve got a blank canvas which is really exciting, but it is certainly daunting”

Airspeeder is one of the biggest disruptor sports coming through at the moment. Their Head of Media, Stephen Sidlo caught up with the iSportConnect Content Manager, Alex Brinton to discuss how they are progressing, their plans to build an audience and Back to the Future.

Firstly, for those who don’t know please explain what Airspeeder is?

Airspeeder is the world’s first flying car racing series. So electric Octocopter vehicles with vertical take off and landing capabilities. They’re not available for the consumer market but like all forms of urban transportation it starts with competition to enable that market to grow, similar to how the Space race and early motorsport helped spur innovation and growth in their respective industries, Airspeeder aims to do the same for flying cars through the development and manufacturing of these craft and the organisation of the sports rights holder series.

What was your background before you joined Airspeeder?

I began my career in breaking news and digital journalism at the beginning of the social media era. I assisted in verifying video content during the Arab Spring with a company called Demotix. However, my constant exposure to negative current events led to a growing cynicism, and I eventually transitioned to sports media. What I quickly discovered was that many rights holders were hesitant to embrace new digital technology or be creative with social media around 2008. Specifically, ball sports were resistant to change. Nevertheless, I was determined to find lesser-known or Tier 2 and 3 sports and assist them in innovating. That is when I came across the autonomous racing series, Roborace. Through trial and error I became quite obsessed with how fans found new sports, what they like and don’t like, measurement and habits.

This was when I knew I wanted to work in niche sports and answer the question, How do we bring a new sport to market in 5 years? It was this sort of work that led me to Airspeeder and I am really happy here, the project is such an exciting one.

What was it that made you want to be part of the company?

Our founder, Matthew Pearson, always had the vision that we should all have flying cars. If you think about the movie Back to the Future, they travel to 2015 and their vision was that there would be flying cars. The best way to introduce this concept to the world is through motorsport as it is the easiest way to gain acceptance. So, we are now building the cars and creating the broadcast sport from scratch. He made some wise early hires, including people from Formula One, Ferrari, and McLaren.

For me, it was great because I joined a company that gave me the time and resources to create, while also allowing me to bring my experiences working with rights holders like World Rugby, Major League Baseball, Arsenal, and Goodwood. The opportunity to work on frontier technology was something that really excited me because you learn and implement sports technology at such a fast pace. A lot of what we are doing is testing and learning, but we are shaping the future of sports consumption. We are a true testing ground for the future of sport.

One of the most exciting – yet challenging – things about Airspeeder is that you are starting with a completely blank canvas, tell us a bit about that experience?

It’s certainly exciting, but also quite daunting. We’ve determined that the element of danger is what truly drives interest in sports. Racing with flying cars brings its own level of risk, especially when they become manned, and fans will be able to experience the sensations of the pilots through 5G haptic gloves at home.

Before joining this field, I was not fully aware of the numerous aspects involved. The extensive testing and legislation that has gone into designing and making these crafts legal to fly has been a meticulous process. I have to constantly visualise what the sport will look like in the next 6 to 12 months. How the tracks will appear in XR, how our filming drones will safely interact with our speeders, and all of this has to align with what the audience expects from a flying car series. It’s a lot of uncharted territory decisions, which is what makes it so exhilarating.

We have peers in other new motorsports who are a few years ahead of us; Extreme E is a great example of this. We have the opportunity to observe what worked for them and what didn’t and learn from them, which is extremely valuable. I also think we’re getting a bit of a grace period because we’re building brand new crafts that haven’t been used for anything else. If we were using SUVs or scooters, I don’t think we would have that advantage.

How much have your thoughts and ideas evolved from when you first started?

My ideas are constantly evolving, especially when we bring on partners like IWC and Telstra. To be honest, we had hoped to have more partners onboard by now. The pandemic did slow down our progress a bit in that regard. However, we are hoping to bring more partners onboard in the first half of this year, as it relates to the element of jeopardy, I will have something more concrete to focus on.

I will be able to tell the stories of the pilots, which will engage the audience in a new way, and bring more people into the sport. However, to address your original point, we are always evolving as our timelines can change quickly. Sometimes new legislation must be met or something that we thought would help the craft fly, doesn’t work when we test it.

Audience growth is perhaps the most important piece of the jigsaw because that brings in sponsorships and TV money further down the line, how are you planning on doing that?

Yes, that’s the big question, isn’t it? The question I am always working hard to answer is “How does an audience watch this sport?” There’s no track, no pylons, and no helicopters. We can film it with drones, but then how does the audience know where the track is? This requires a 5G technology partner and a telecommunications partner to make all the drones and craft communicate with each other, which has never been done before.

At the moment, our audiences come from a variety of places, including motorsport fans, esports fans, science and technology fans, and aviation fans. We are also planning to release a simulator game this year, which will be another way to engage an audience.

The digital track is also very exciting because it opens up many opportunities for sponsors to bring their own exciting activations that would never be possible at a traditional race track.

Currently, our audience is mostly from esports and those interested in the future of motorsports, but that could change quickly.

There’s still a long way to go, but it is very exciting.