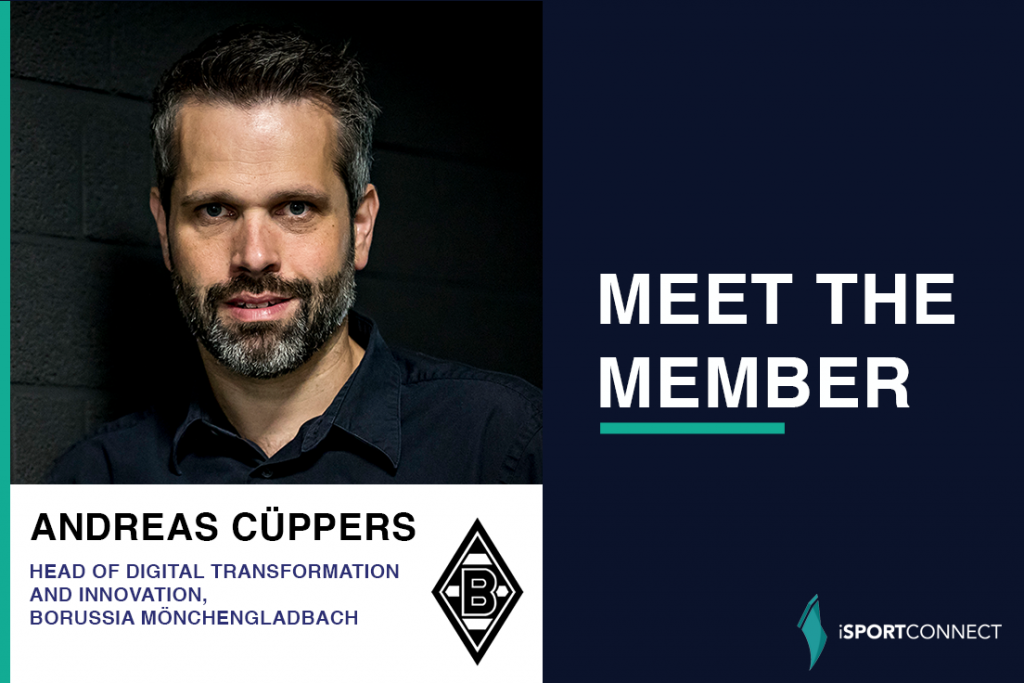 “We’re Trying To Get A New Mindset Into The Organisation, A Different Way Of Thinking.” – Andreas Cüppers, Head Of Digital Transformation And Innovation Borussia Mönchengladbach

With the new Bundesliga season starting in less than a month, iSportconnect spoke to Andreas Cüppers, new Head of Digital Transformation & Innovation at Borussia Mönchengladbach about trying to continue progressing internally during Covid-19 and how the club is looking to use digital and data moving forwards.

What’s your experience of the COVID period been and how has it affected you in terms of progressing with any innovations?

It was and, to be honest, is still a difficult situation for everybody because no one is really able to oversee the future long-term impact it has on professional football. We have to deal with the insecurity and the fact that we don’t have any influence on how things will develop.

We are only able to invest in innovations when we are absolutely sure that this money will return or that the investment is beneficial in any other way. It’s not the right time for experiments where you are not sure whether to monetise an idea or not. But what we did at the beginning of Covid-19 is that we changed our focus much more to internal processes, looking at what we can easily improve, simplify or speed up through the smart use of technology.

“At a certain point I read that in some way we were forced to digitise and that’s something I would definitely underline, because people that were a bit sceptical for example about having a video chat, suddenly in a day they were forced to do that.”

Luckily we were about to implement Office 365 at the beginning of Covid, that helped us a lot when people were working from home. We also decided to invest in a software that helps us manage the shift plans of freelancers in departments like catering and events or merchandising.

I’ve heard a few people say it’s not necessarily increased things, but the period has maybe sped up what there were plans for?

Definitely. At a certain point I read that in some way we were forced to digitise and that’s something I would definitely underline, because people that were a bit sceptical for example about having a video chat, suddenly in a day they were forced to do that.

Today, for example the Bundesliga had a video session with the whole league of 36 clubs [including Bundesliga.2]. Half a year ago it would have been more or less impossible to have a video conference with them. In some way a lot of people have been forced to deal with digital technologies.

How did you adapt in terms of keeping the fans engaged, you were kind of one of the first teams that had cardboard cutouts in the stadium for fans?

We can’t take the credit, that was actually the idea of our supporters organisation! Everything was organised by the fans and people have now come to the stadium to take them home. When there was no live football, we started to relive some classic matches from our history. Fans could vote for their favourite matches, we declared a live match day on which we showed the match on our OTT channel and followed the match on our social media channels as it as if it was live.

“We want to implement this data driven approach in the whole organisation and nearly every business field we are operating in.”

And when the league finally came back, we tried to use the international attention on the Bundesliga as it was the first professional league to return, so we were aware that’s a special situation and tried to attract people in the UK as well. But due to the strict regulations we were limited to only one content creator inside the stadium. So we had less content to distribute, but more attention.

To be honest, that’s one of our key tasks for the future. To use the data we already have in a proper way and to collect even more data or new data to be able to get in touch with every fan in a really individual or personalised way.

That’s something we’re not ready for right now, but we want to work on that to offer the fan things that are really relevant for him or her, and we can learn that just by looking at the data and that is something we will definitely focus on in our new structure and in the new department.

Do you think this is something that’s been helped by this situation, as it’s maybe made you closer to the fan over the past couple of months?

It’s not really our problem to get access to the data of the fans, they have a strong trust in us, they know we take care of their data. We only want to know more about them, just to make them better offers, I think that’s something they understand. But the current situation is something where you realise that you get an even deeper connection and a lot of fans know that we’re in a difficult situation and want to support us.

Is personalisation the biggest key going forwards for supporters?

Definitely that’s one of the key points in our digital strategy and something we need to work on, but not only when we talk about fan relationship. We want to implement this data driven approach in the whole organisation and nearly every business field we are operating in.

In some places we already have data but we don’t take a deeper look at it, so we want to enable the employees to have a look at the data. They don’t need to understand the technical stuff behind it, but they need to know which dashboards they can look at when they want to get a better impression on what they are working on, or when they do to make a decision.

“We want the fan to get the best possible experience around their favourite club, that’s for sure. On the other hand, we’re also trying to get a new spirit or new mindset into the organisation, a different way of thinking.”

That’s exactly the way the sporting department is working when they try to sign new players, they have databases where they have a close look and scout potential new players, so that’s something we should also do in our normal business.

You mentioned the internal and external side, is this new role as Head of Digital Transformation and Innovation looking at all of these aspects?

Yes, it’s both. I think in both fields we need to analyse the data we receive from our various digital touch points and we must also establish new touchpoints by implementing further digital services that will also improve the fan experience and the customer journey.

That’s something we will focus on because we want the fan to get the best possible experience around their favourite club, that’s for sure. On the other hand, we’re also trying to get a new spirit or new mindset into the organisation, a different way of thinking on working together to help people make the right decisions.

Looking into the future, what do you might be the next big innovation within sport that’s going to transform the experience?

Good question, if only I knew! We see a lot of trends and innovations, but we’ve also seen a lot of things everyone thought that would be the next big thing. We believe that big data will have a strong impact on sport, and in terms of performance analysts around the team.

But it could be that something in relation to this special Covid-19 situation will be the next big innovation within sport, when you think that maybe fans will be able to return to the stadium, because right now we don’t know how long we have to deal with this special situation.