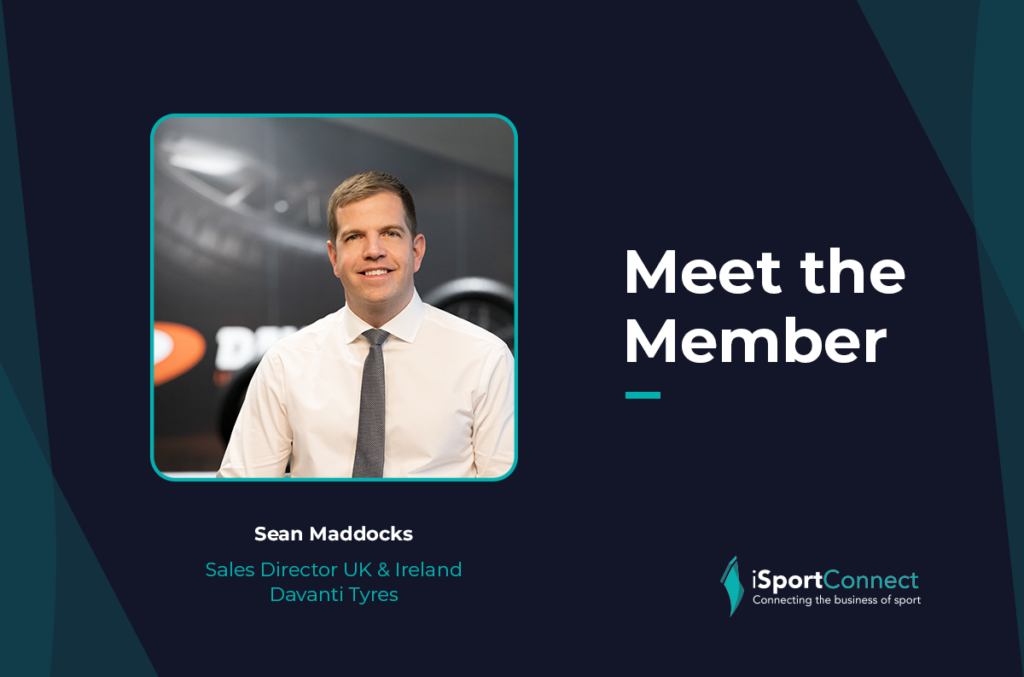 Meet the Member: “The costs in terms of getting involved in football are high, but there’s nothing else that can compete in terms of eyeballs”

Sean Maddocks is the Sales Director for UK and Ireland for Davanti Tyres, our Content Manager Alex Brinton sat down with him to speak about sports partnerships, Everton and why it is so hard to define the ROI from those partnerships.

Davanti started in 2015, tell us a bit about the journey the business has been on since then?

Yes, it was a new company formed in 2015 but the parent company has been a leading company in the tyre industry since the 1980s. Our parent company, Oak Tyres, has been at the forefront of the wholesale tyre market for the last few decades, but then in 2012 the owners decided the market conditions were right to start the process of creating a brand which they wholly owned and manufactured. From a standing start in 2015 we now export Davanti Tyres to over 70 countries and we are now the third highest selling mid -range tyre brand in the UK.

And your role in that particular journey?

I am the Sales Director for the UK and Ireland, which is our home market. We sold our first tyre in April 2015 and I came on board in August so I have really been here from the start. I’m responsible for the sales in the UK and Ireland which is our highest volume market, but is only a small part of the global jigsaw really. I also have a hand in the development, strategy and marketing of the brand.

What makes sport and football in particular an attractive opportunity for Davanti?

Football has always been something that has been attractive to the tyre industry because it is a great way to reach the masses. The costs in getting associated with football are obviously high, but there is nothing else that can compete with it in terms of eyeballs. Strangely, the aim wasn’t primarily to directly influence a consumers purchase choice, even though it was customer-led advertising, the aim was really to introduce the brand identity to the global tyre market as well as increase the awareness of the brand name with potential consumers.

It definitely came into it, but it wasn’t Everton or nothing. A lot of us here are Everton fans here, which helps. At the time we started the relationship the team were doing well and were regularly finishing within touching distance of the top six. We also saw the investment from the owners in the club and the stadium. The importance of the partnership with Everton is shown when we go travelling around the world doing trade shows and people already have knowledge of the brand.

Also being a local brand we are able to put on events in partnership with Everton in the local community, which is a real bonus. We really believe in long-term partnerships so even though the team hasn’t been performing well recently we are committed to the longevity of the partnership within the Premier League.

What sort of sports teams and brands do you look to partner with?

We try to partner with different teams/individuals depending on what we want to achieve from the partnership, so Everton was done to try and create an awareness globally. Being a locally-owned company we do a lot of activities with the local community around Liverpool. Over the past few years, we’ve tried to support the local community through CSR activities like providing school uniforms for underprivileged children, helping to feed children during the school holidays when the government withdrew support, and supporting grassroots football teams by providing equipment. It’s very important to us, being a family-owned business, that we are active in the local community and are seen as a partner which takes a greater involvement with the club outside of the standard advertising commitments. We are also the back-of-shirt sponsors for the Wigan Warriors, who are one of the most successful Super League teams. That partnership is based a lot on visibility of the brand so we do a lot of engagement with the players, the clubs and the fans.

Unsurprisingly we do also do some work in motorsport – being a tyre company there really isn’t much substitute for the credibility actually having your tyres on a racing car can give you. We have partnered with a race track in Portugal for the past 6 years as the Official Tyre Partner, the Autodromo Internacional in the Algarve, which is the home of the Portuguese F1.

We have a long-term partnership with British racing driver Dan Zelos, who recently won the Mini Challenge Championship in a fully branded Davanti car. The championship is the undercard to the British Touring cars, so we get great visibility through their coverage on ITV4 and with the racing community in general. We’ve worked with Dan since he was racing go karts, so you can see that longevity is very important to us with all of our partnerships.

In a two team city such as Liverpool did you have to weigh up the possible negatives of siding with the blue side of the city?

No to be honest that hasn’t been an issue at all, if anything Liverpool fans probably feel a bit sorry for us. Liverpool as a city is massively passionate about football, but I feel like over the last 10 years or so the rivalry between the two clubs has calmed down a bit and the city has really come together. Both clubs are such a massive part of the city and you saw how the fans came together after the Hillsborough enquiry, the rivalry is more based on banter rather than particularly bitterness. Also when you are selling around the globe the benefit of being partnered with one Premier League club, vastly outweighs any possible negativity people might have because of a rivalry.

What are you looking for in terms of ROI from a sports partnership because the benefits of this type of partnership are often hard to quantify?

It is always hard to quantify ROI from sports-based partnerships but particularly in our field. Tyres are a distress purchase, you don’t wake up in the morning and decide ‘oh brilliant, I am going to buy some new tyres today’. So we can’t measure ROI by a sudden spike in sales. We have to speak to our dealership network and find out if they are using it as a selling point? Are customers speaking about it? Are they displaying it at their depots? Partnering with a Premier League club also creates a lot of momentum behind your brand which is really helpful and shows your partners that you are serious about investment in marketing. The international benefits of the partnership were almost more important than the UK strangely. Because it gave us validation and recognition when we went to trade shows around the world so that was a great way of seeing ROI from the partnership.

There’s a lot of talk at the moment around brands being culturally aware at the moment. Is this something you are paying attention to?

We have never been a contentious brand in terms of our approach to marketing or our background, so it isn’t really a problem. In recent years we started a carbon offset partnership with Ecologi as part of our continued journey to become climate positive.

We also do a lot of work with charities both in and outside of Liverpool, so it is very important to us that we are seen as doing something to give back to the community as well and I think that stems from still being a family business.