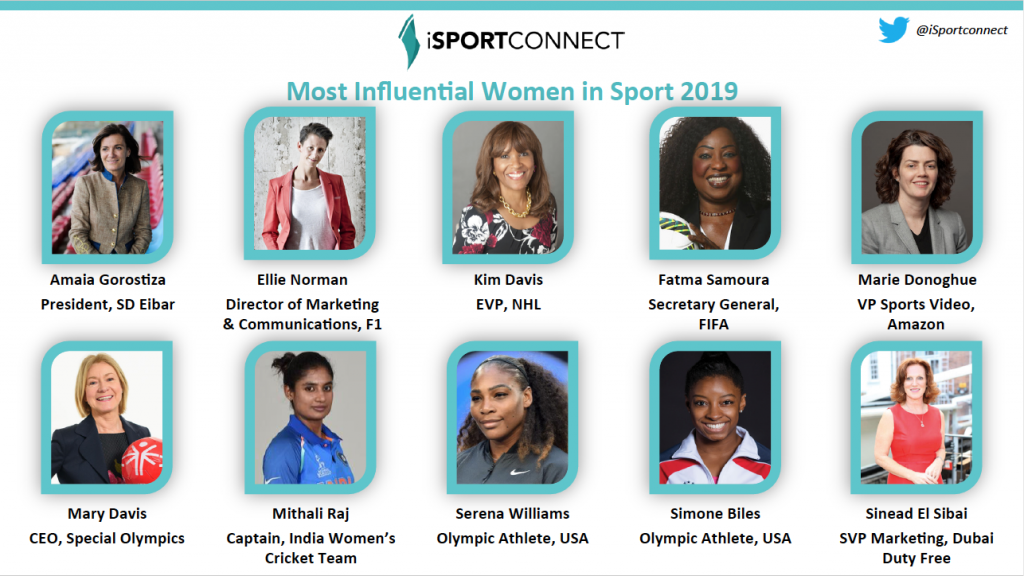 In celebration of International Women’s Day on March 8, iSportconnect has conducted a poll on the Most Influential Women in Sport.

The names were selected by a jury of industry leaders from a shortlist of potential choices. We thank them for their co-operation.

It’s important to note that the list of nominees was limited mainly to names who were not included last year. This was done in order to continue to highlight and encourage the emergence of new leaders.

Congratulations to these inspirational leaders.

Here’s more about them:

In 2016, Amaia became the first female president in the club’s history and has been able to keep SD Eibar, the smallest club in LaLiga, competing in one of the top leagues in the world. A native of Eibar, Amaia is a member of the Amaya Tellería Group’s Executive Board. She is also a member of Elkargi SGR’s Finance Committee, as well as an Executive Board member for that company and others, such as Dominion and APD Zona Norte, and she is also auditor for the latter.

Ellie is a marketing professional with an extensive Automotive and Media background. In 2004, Ellie was headhunted to join Honda Motor Europe as Communications Manager from agency-side where she received several accolades. In 2012, Ellie joined Virgin Media as Head of Advertising where she led the evolvement of all brand campaigns. Following the recent change in ownership at F1, Ellie joined the management team as the company’s first ever Director of Marketing, with the main purpose of leading the sport and growing its existing fan base whilst attracting a younger audience. Ellie’s current position also encompasses F1 Customer Service and Communications.

Having spent 21 years working on high level United Nations programmes, Fatma is known for her commitment to furthering humanitarian causes, which led to her becoming the first African and woman FIFA Secretary General. Since her appointment in 2016, the number of women employed by the organisation has increased across the board. In September 2018, Fatma was given the African Renaissance & Diaspora Network’s (ARDN) first ever Award for Sport, which recognises her dedication to the development of humanitarian causes and her championing of diversity and gender equality.

Kim joined the NHL just over a year ago and is making an incredible impact in the growth of the game of ice hockey. She aligned the NHL’s social responsibility assets under a single brand, “Hockey Is For Everyone,” and has set forth an extensive agenda for diversity and inclusion across the sport. NHL players come from hockey playing nations around the world, with more than one-quarter of them from outside North America.

Marie recently joined Amazon, where she is responsible for the sports strategy of one of the biggest companies in the world, enabling customers to access live and on-demand sports content in over 200 countries and territories. Marie was previously Executive Vice President, Global Business and Content Strategy at ESPN, and headed ESPN’s Business Affairs, Business Development and Partnership groups, where her responsibilities included the rights deals with the NFL, NBA and MLB. She oversaw all digital deal-making for ESPN, including their relationship with BAMTech, the home of their first OTT streaming platform.

Mary focuses on addressing inactivity, injustice, intolerance and social isolation by encouraging and empowering people with intellectual disabilities to be productive citizens in their communities, creating a more welcoming and inclusive society. She started as a local program volunteer and coach, and has since held a series of leadership roles, helping create the first ever Regional games, the 1985 Special Olympics European Games, and working to build a powerful national programme as CEO of Special Olympics Ireland. Mary helped globalise the movement when she was CEO of the first Special Olympics World Summer Games held outside the USA, the 2003 Games in her native Ireland.

Mithali is captain of the Indian women’s cricket team and often regarded as one of the greatest batswomen in history. She is the highest run-scorer in women’s international cricket and the only female cricketer to surpass the 6,000 run mark in WODIs. During the 2018 Women’s Twenty20 Asia Cup, Mithali became the first Indian cricketer to score 2000 runs in T20Is, and also became the first female cricketer to reach 2000 WT20I runs. Mithali is the only player to have captained India in more than one ICC ODI World Cup final, doing so twice in 2005 and 2017, and in February 2019 became the first woman to play in 200 ODI matches.

Serena holds the most Grand Slam titles in singles, doubles, and mixed doubles combined among active players. Her 39 major titles puts her joint-third on the all-time list and second in the Open Era: 23 in singles, 14 in women’s doubles, and two in mixed doubles. She is the most recent female player to have held all four Grand Slam singles titles simultaneously and the third player to achieve this twice. She is also the most recent player to have won a Grand Slam title on each surface in one calendar year.  Serena is a driving force for equality and fairness in sport, and her efforts to combine her career with being a mother resonated with women around the world.

Simone was the first gymnast to win three consecutive world all-around titles and at Rio 2016, she became the first female US gymnast to win four gold medals at a single Games. During her break from gymnastics, she went public with her personal experiences related to the sexual abuse scandal that engulfed the national federation. Simone returned to competition in 2018 and at the US national championships, she became the first female gymnast in nearly 25 years to win all five events, including a record-setting fifth all-around title. She is now the most decorated female gymnast in history with a career total of 20 world championships medals.

Sinead, an Irish marketing expert, has been instrumental in growing the Dubai Duty Free brand as a global leader in airport retail. DDF reached a new record in sales in 2018 of $2 billion, in big part thanks to the innovative work done by Sinead and her team. During the sporting events with which DDF partners, Sinead leads a variety of women’s initiatives, including a very popular breakfast series hosted in partnership with JP Morgan. Sinead is extremely passionate about continuing to grow the international travel hub Dubai has become; and she is also fully committed to inspire young women in the UAE to embrace professional paths and balance them with more traditional female roles.