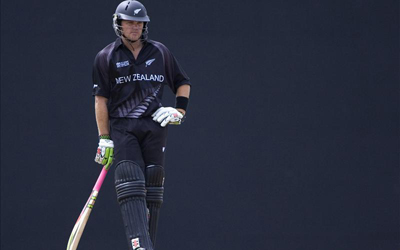 Lou Vincent Banned from Cricket for Life after Admitting to Cheating

Former New Zealand batsman Lou Vincent has been imposed with a worldwide, lifetime ban from cricket after admitting to match-fixing.

The ban has been imposed by the England and Wales Cricket Board (ECB) and applies to matches put on by themselves, the International Cricket Council (ICC) or any other national federation.

Before his punishment was announced, Vincent said: “My name is Lou Vincent and I am a cheat.

He was found guilty of breaching 18 anti-corruption rules between 2008 and 2011 and is therefore banned from playing, coaching or participating in organised cricket.

In his statement, Vincent added: “I have abused my position as a professional sportsman on a number of occasions by choosing to accept money through fixing.

“I have lived with this dark secret for many years, but just months ago I reached the point where I decided I had to come forward and tell the truth.”

Vincent admitted to match-fixing in two domestic Twenty20 games involving Lancashire, a team he played used to play for.

One match was against Durham in June 2008 where he scored only one run.

Other matches included a 2011 quarter-final where he was caught behind first ball and a CB40 fixture where he played for Sussex and was run out.

ECB chief executive David Collie said: “We are extremely pleased that an individual who repeatedly sought to involve others in corrupt activity for his own personal gain has accepted his conduct warrants a lifetime ban from cricket.

“It once again highlights our resolve to keep cricket clean and rid the game of the tiny minority who seek to undermine the sport’s integrity.”

ICC Chief Executive David Richardson added: “The ICC endorses the decisions of the CLT20 and ECB to impose life bans on Lou Vincent.

“The ICC has a zero-tolerance approach towards corruption and these life bans, together with the life ban recently imposed by the ECB on Naveed Arif, should send out a loud and clear message to all those who indulge in corrupt practices and think they can get away with it.”