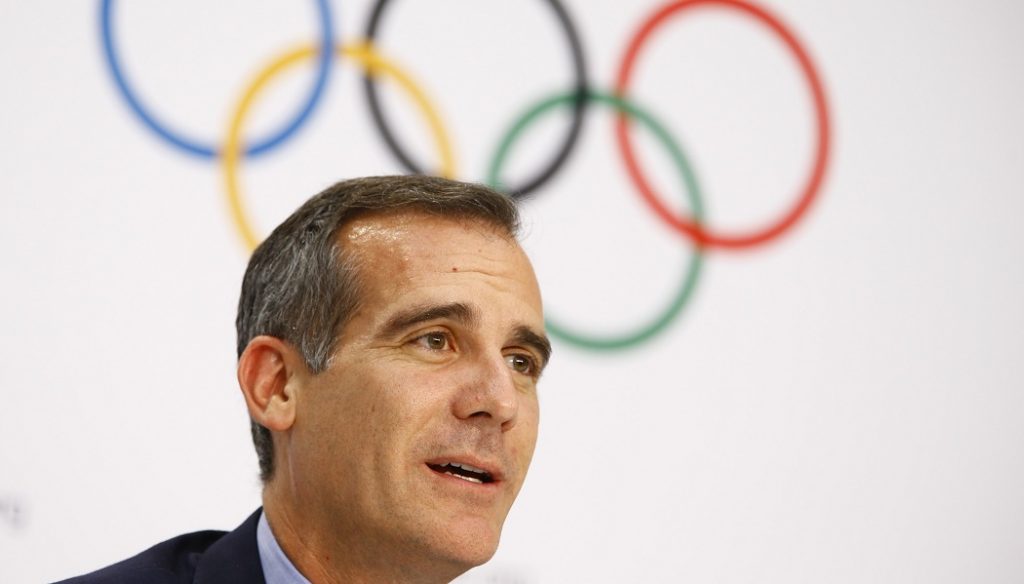 Under the terms of the Host City Contract 2028, the IOC will advance funds to a Los Angeles Organizing Committee in view of the longer planning period and to increase participation and access to youth sports programs in the City of Los Angeles in the years leading up to the Games. The IOC contribution as stipulated by the HCC is $1.8 billion and has the potential to exceed $2 billion according to the evaluation of the L.A. bid committee when taking into account the estimated value of existing sponsor agreements to be renewed and potential new marketing deals.

The right partnership at the right time for the right city!

Discussions about the unprecedented simultaneous election of the 2024 and 2028 Games were initiated between IOC President Thomas Bach, Los Angeles 2024 and Paris 2024 delegations, including their respective mayors Eric Garcetti and Anne Hidalgo at the SportAccord Convention in Aarhus, Denmark in April. Today`s announcement follows IOC Members’ unanimous approval at the July 2017 Extraordinary IOC Session in Lausanne, Switzerland for the simultaneous election of the host cities of the Olympic Games 2024 and 2028.

The Los Angeles City Council and United States Olympic Committee Board of Directors will consider the agreement for approval in August. If approved, the IOC, LA and Paris may enter a tripartite agreement, clearing the way for IOC Membership to simultaneously confirm the Olympic Games 2024 to Paris and the Olympic Games 2028 to Los Angeles at the next IOC session in Lima, Peru on September 13, 2017.

Since his election, President Trump has been personally involved in helping to make LA’s bid a truly American bid and the White House Office of American Innovation and the US Senate and House of Representatives have been true partners throughout. The USOC and Los Angeles bid team greatly appreciate their strong commitment to bringing the Olympic and Paralympic Games back to the United States.

Los Angeles Mayor Eric Garcetti said: “This is an historic day for Los Angeles, for the United States and for the Olympic and Paralympic Movements around the world. Today, we take a major step toward bringing the Games back to our city for the first time in a generation and begin a new chapter in Los Angeles’ timeless Olympic story.

“This agreement with the IOC will allow us to seed a legacy of hope and opportunity that will lift up every community in Los Angeles– not in 11 years’ time, but starting now and continuing in the years leading up to the Games. LA 2028 will kick-start our drive to make LA the healthiest city in America, by making youth sports more affordable and accessible than ever before.”

IOC President Thomas Bach said: “The IOC welcomes this decision of the Los Angeles Olympic and Paralympic bid committee. They presented a strong and enthusiastic candidature that embraces the Olympic Agenda 2020 sustainability priorities by incorporating existing facilities and encouraging the engagement of more youth in the Olympic Movement. Therefore, we are very happy that as part of this Host City Contract, we are able to expand the impact of city youth sports programming and encourage the healthy lifestyle of Angelenos for the next 11 years. We are very confident that we can reach a tripartite agreement under the leadership of the IOC with LA and Paris in August, creating a win-win-win situation for all three partners. This agreement will be put forward to the IOC Session in Lima in September for ratification.”

Los Angeles bid committee Chairman Casey Wasserman said: “Los Angeles will help ensure that the Games are sustainable and relevant for future generations, with the IOC’s Olympic Agenda 2020 reforms as our guiding principle, a ’no-surprises’ Games plan and the enthusiastic support of the people of LA. Two great world cities in LA and Paris have developed two very different but outstanding plans. Thanks to the IOC’s courage and vision in creating a mechanism for this unprecedented dual award, both cities now stand together ready to serve the Olympic and Paralympic Movements for more than a decade.”

Los Angeles City Council President Herb Wesson said: “The City of Los Angeles is a proud and enthusiastic partner in this ‘win-win-win’ scenario. The opportunity to again host the Olympic and Paralympic Games is a golden occasion further strengthening Los Angeles – not just through bricks and mortar, but through new opportunities for our communities to watch, play and benefit from sport.”

USOC Chairman Larry Probst said: “Today was an important step in the process to bring the Olympic and Paralympic Games back to the United States. In the coming weeks, we look forward to presenting this to the USOC board for approval of Los Angeles’ 2028 candidature in anticipation of a positive vote by the IOC membership in September. LA 2028 will help connect the Olympic Movement with the youth of the world and provide the IOC with long-term stability and sustainability, and demonstrate the viability of hosting the Games to future bidders.”