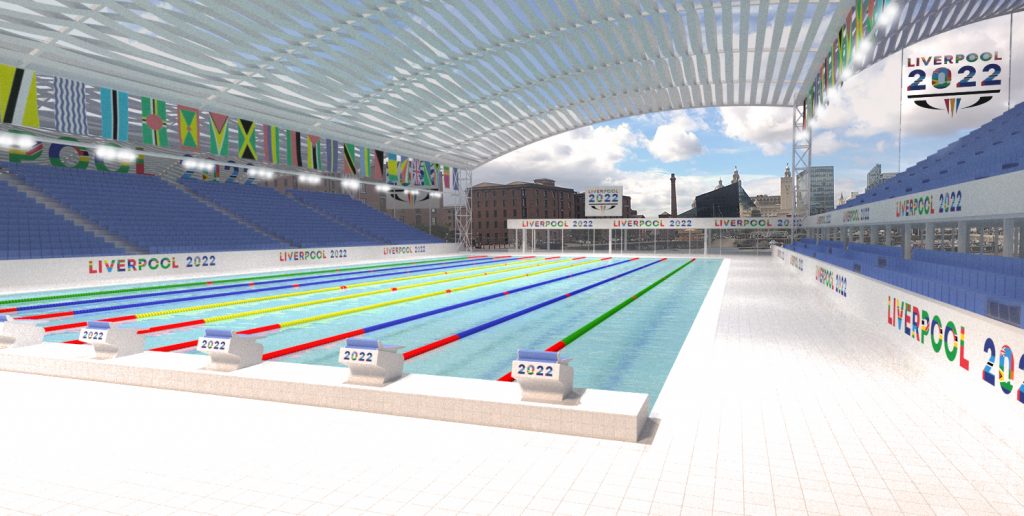 Liverpool has today unveiled plans to host the 2022 Commonwealth Games that will speed up the transformation of its waterfront.

The riverside regenerationof the Bramley-Moore Dock is central to Liverpool’s bid to stage the Games. The dock, just two miles north of the city centre, would later be home to Everton Football Club’s new stadium.

The new football stadium – which is seeking to replicate the intimacy, fan-proximity and atmosphere of Goodison Park – will accommodate a temporary athletics track for the Games.

The track will be installed after the final home game of the 2021/22 season and will be removed before the first scheduled kick-off of the 2022/23 season.

As part of Liverpool’s transformational plan the city is also proposing to host:

The plan is set to accelerate £1bn of investment up to 10 years ahead of schedule and create more than 12,000 jobs.

Other key highlights of Liverpool’s hosting plan include the following existing venues:

A further key element of Liverpool’s plan is to host the Athletes Village beside Everton FC’s new stadium in Nelson Dock, within Peel Land and Property’s £5.5bn Liverpool Waters scheme.

Liverpool 2022 Bid Chairman Brian Barwick said: “Liverpool is a world-class city and what we have unveiled today is truly transformational. We are utilising our existing, world-class venues as well as facilities linked to the massive regeneration that is already taking place in the Bramley-Moore Dock area that would be home to the athletes’ village.

Some of the other eye-catching plans, such as the dynamic new pool in the docks and the creative approach to working with Everton FC’s new state-of-art stadium will set the bar for how major games leave a real and tangible legacy.”

The city also today launched its official bid website: www.liverpoolCG22.org with a call to action for the public to back the bid via social media with the hashtag #IAmLiverpool2022.