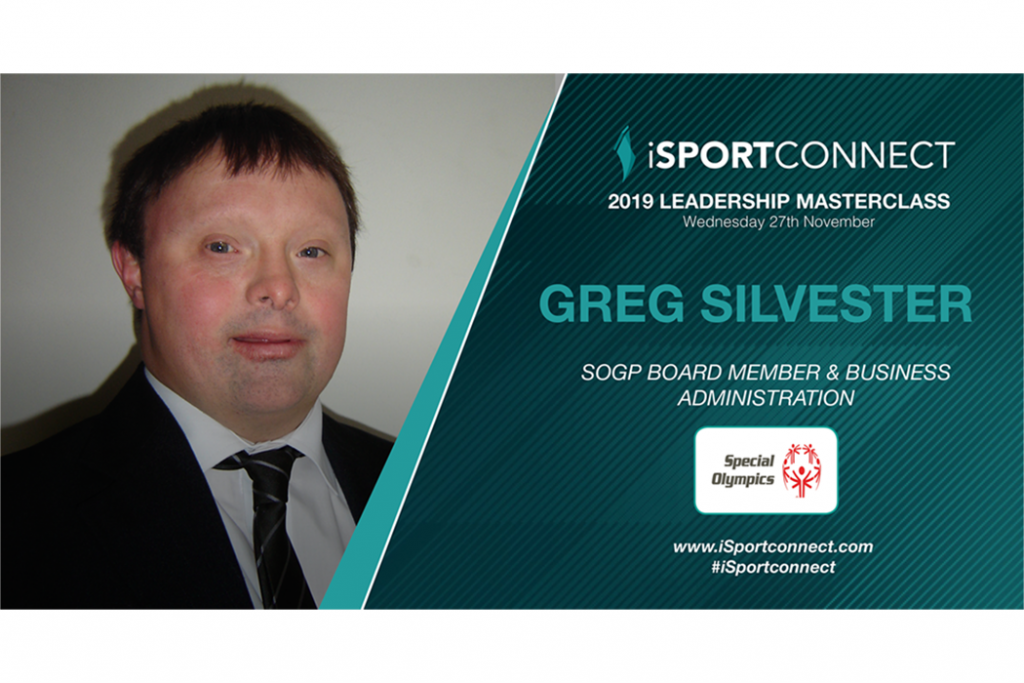 At tomorrow’s iSportconnect Leadership Masterclass we will have a presentation from the inspiring Greg Silvester, board member of Special Olympics Great Britain.

He has been a coach and an athlete across a variety of sports, all while living with Downs Syndrome.

Greg is a continuing inspiration for young children, families and carers around the county as he has excelled as athlete, coach and advocate when raising awareness of learning disabilities in Great Britain.

He first began competing in Special Olympics GB gymnastics at the age of 10. In 1989, Greg participated in his first National Summer Games held in Leicester where he won a Bronze medal. “That was when I really started to enjoy it,” Greg said, recalling the excitement of early victories. “I met so many people in sport who were great and I loved being a part of it.” A few years later, under the tutelage of former Special Olympics coach Alistair West, Greg became ‘All Round World Champion’ winning seven medals, including four Golds, at the 1995 Special Olympics World Summer Games in Connecticut, USA.

During the mid-90s Greg became one of the first youngsters in Britain with Down’s Syndrome to become a qualified mainstream gymnastic coach. Besides coaching, Greg has also trained and competed in swimming, athletics and table tennis.

In 2000, Greg was chosen from hundreds of British people to carry the Olympic torch in Auckland, New Zealand, on its journey to the Sydney Games. In the same year, he was awarded a place in Wolverhampton’s Sporting Hall of Fame at Aldersley Leisure Village, and was one of 12 ‘People of the Year’ commended by the Royal Association for Disability and Rehabilitation – others included champion rower Sir Stephen Redgrave, and in 2009, he competed in table tennis at the Special Olympics GB National Summer Games, winning one Gold and two Bronze medals.

Since 2005 Greg has been representative of Mencap’s Self Advocacy Committee and in 2010 he joined the ‘Changing Our Lives’ initiative, where Greg supports people with learning disabilities of all ages to advocate for their rights. In 2010, Greg obtained an NVQ level 2 in business administration following a successful work experience at National Grid office in Warwick. In 2011, he was offered a permanent position two days a week as business administrator at National Grid’s West Midlands Gas Alliance office in Wolverhampton.

Greg joined the Special Olympics GB Board in December 2010 and he will be joined by his colleague Charly Classen at the event.

At ESPN Charly was General Manager – Europe, Middle East and Africa, South Asia and Oceania.  In his role he was responsible for the growth, strategic guidance, development and oversight for all of ESPN’s business and operations in the region. He was also a member of the Walt Disney Company’s senior leadership team in EMEA and served on the SuperRTL advisory board, a German joint venture between RTL and Disney. Prior to ESPN, he held positions at Fremantle and marchFIRST.

Charly is a native of Hamburg, Germany who has lived in the UK for over 25 years. He now lives in London with his wife and daughter and dog. He holds a BA in Politics, Philosophy and Economics from Oxford University. He is fluent in English, German, Spanish, and Portuguese.

We are all looking forward to the Leadership Masterclass and hearing Greg speak to the audience on Thursday!