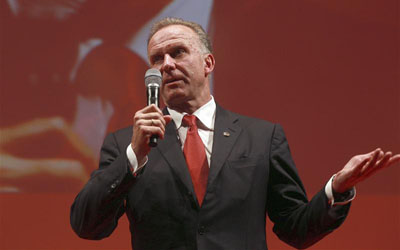 The chairman of the European Club Association (ECA), Karl Heinz Rummenigge (pictured), has insisted that club football must not pay for the cost of the 2022 FIFA World Cup’s potential switch from summer to winter.

The chief executive of Bayern Munich made his comments at the Leaders Sport Summit in London on Wednesday.

FIFA is currently investigating whether the tournament should be moved from the usual summer dates because of the searing temperatures in host country Qatar.

But Rummenigge was adamant that no matter what decision was taken, domestic football business continues as normal.

“We are ready to discuss changing the date under one condition – that there is no damage for club football because if we change from summer to November or January it will affect our business,” he said.

If the dates are changed, there could be a potential clash with the 2022 Winter Olympics. But ECA vice chairman Umberto Gandini believed the Olympic community would have to make way for football’s showpiece.

“The World Cup is one of the major events in the sports landscape [along] with the summer Olympics,” he said. “But the Winter Olympics are not up there.

“When you have such a huge event like the World Cup don’t tell me it’s not possible to move the Winter Olympics a bit especially now where [the IOC] is still in the bid process and there are only two candidates; Beijing and Almaty.

“With wisdom and debate it is possible to achieve a solution which will satisfy the majority.”

Webb in favour of artificial pitches

CONCACAF president Jeffrey Webb voiced his support for artificial pitches following negative reaction to their planned use in the 2015 Women’s World Cup in Canada.

A group of leading players, including US star Abby Wambach, have filed a lawsuit against the Canadian Soccer Association (CSA) and FIFA claiming sexual discrimination over the decision to use the synthetic surfaces.

But Webb maintained that modern technology meant that artificial pitches were in fact superior to natural ones, particularly in countries with difficult climates.

He said “when you look at places like the Caribbean and Canada and the weather, then artificial pitches are much better than a poor natural field.

“So for me the game on artificial pitches is seen to be the future and I believe that, if you have the best [players] in the world, then it is much better than on a bad grass field.”

The FIFA vice president was more concerned with the continuing fight against racism. Webb leads the FIFA anti-discrimination taskforce but was disappointed with the lack of action to a number of incidents, including offensive chanting, at this year’s World Cup in Brazil.

The next tournament is in Russia in four years’ time, and the country has already witnessed a fair share of alleged racism incidents in domestic football matches.

Webb hoped education would be the answer.

The Leaders Sport Summit continued on Thursday at Stamford Bridge.

Delegates number in their hundreds, although Leaders founder and ceo James Worrall admitted at the start of the conference that only “6 per cent” of the delegates in attendance were women.

Worrall said he more women were needed in executive roles in sport.