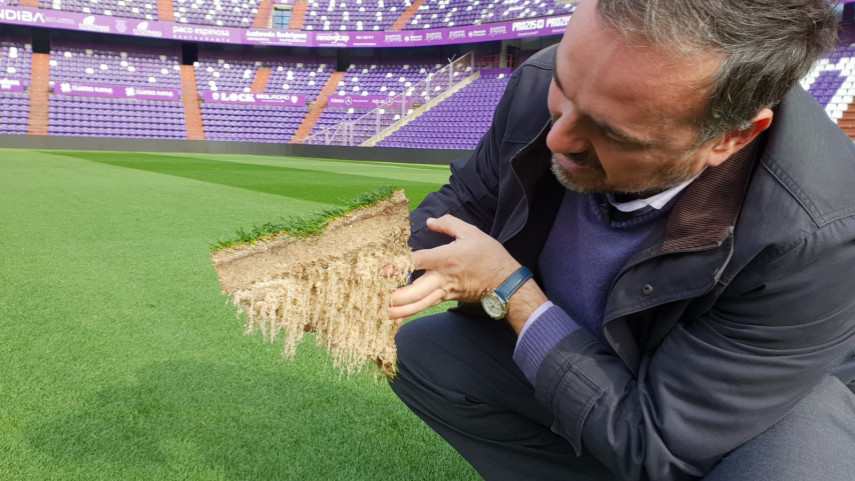 LaLiga App Gets Beneath The Surface Of Football Pitches

A well-maintained football pitch does not just offer a high-quality game but helps protect matters such as player safety and audio-visual spectacle. Playing surfaces are of such high importance to LaLiga that it has taken the unusual step of employing its own grounds quality manager, who is working with the clubs to keep their pitches in the best condition.

Pedro Fernandez-Bolaños is a former golf greenkeeper who has also worked as deputy grounds manager at Real Madrid. He believes his new role is proof of LaLiga’s commitment to improving football by focusing on the finer details of the game.

Commenting on the position of grounds quality manager, he said: “The position is a logical consequence of LaLiga’s desire to have football played on a top-quality surface. We maintain direct contact with the clubs to promote cooperation and create a colourful and attractive competition for the fans.”

The role helps clubs to keep player safety and visual spectacle as top priorities. A well-managed pitch can reduce the risk of player injury, as Fernandez-Bolaños explains: “You have to find the balance between a heavy field, which would put pressure on players’ muscles, and an excessively hard one, which causes joints to suffer.”

“It is necessary to avoid slips or having the studs get caught when a player turns or changes direction and this will ensure better security for the player.”

The LaLiga Television Broadcast Regulations not only require clubs to provide a playing field that is safe for the players and behaves in a uniform way, but one that is in the best possible visual state for TV broadcasts. For this reason, aspects such as the hardness and resistance of the turf, and the uniformity of colour on the grass, are emphasized.

This presents a deeply technical job for both Pedro and the ground staff of LaLiga. But with a new application, the task has now become a lot easier.

By using the new Greenkeeper app, clubs in LaLiga Santander and LaLiga 1l2l3 will receive detailed reports on the condition of the pitch in their home stadiums, replacing a paper report that previously had to be completed.

Club ground staff can use the app to register all necessary details on the playing field, from the local weather forecast, the last time the surface was used, how hard the ground is and the irrigation programmes being used.

Prior to the introduction of the application, clubs would need to submit paper reports on these details for each fixture in LaLiga and the Copa del Rey. The new digital format not only makes the job faster but makes the data easier to share between club staff and LaLiga.

This will quickly lead to positive results, according to Fernandez-Bolaños who commented: “Aside from the convenience for users, the main feature of the app is the creation of data that can be analysed by the business intelligence and analytics department to discover trends and be alerted if there are any changes.”

With so much new information being generated, Pedro will be able to keep improving the quality of playing surfaces across Spain, supporting LaLiga’s work to deliver the best experience for players and viewers alike.

This article appears in LaLIga’s Global Fútbol newsletter. You can read more here.