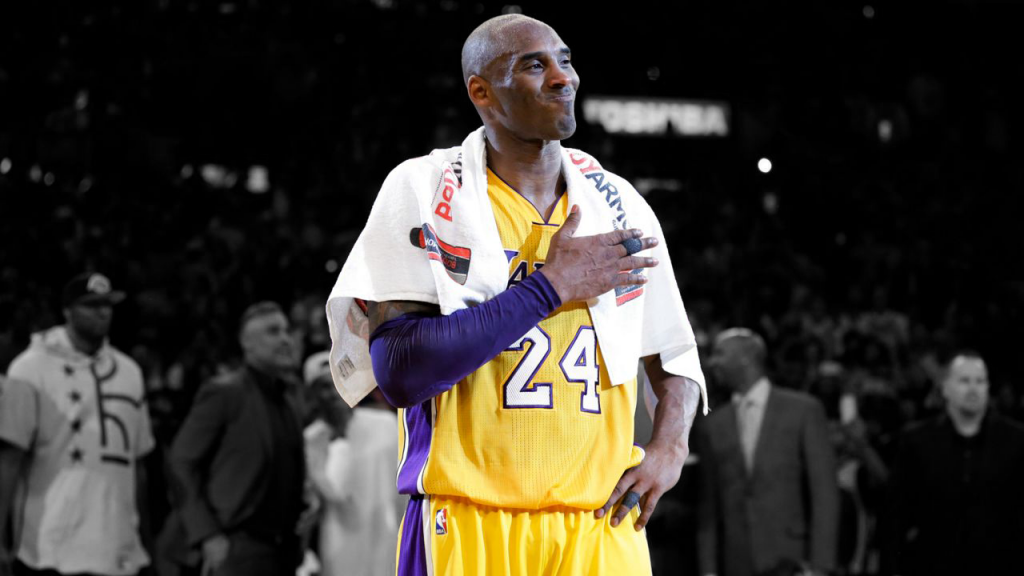 I flipped open my laptop seconds after my phone alarm buzzed and immediately begun to stream two NBA matches just before tip-off.

One was to see my beloved Golden State Warriors set the NBA’s greatest regular-season record of all time, but as a basketball and sports fanatic there was no way I could not watch another simultaneously, to see Kobe Bryant end his legendary LA Lakers career.

With the Warriors victory all but secured early on I could turn all my attention to Kobe, who was amazing the Los Angeles crowd in a scarcely believable performance, eventually finishing with 60 points and a win in one of sports great farewell occasions.

After he had battled through a generally poor final two seasons coming back from an achilles tear suffered in April 2013, that determination to finish his career with a flourish at that age embodied Bryant’s ‘Mamba mentality’ and the cold determination to win he had shown throughout his career.

Thanks to his longtime sponsorship with Nike, who added their huge marketing power and worldwide brand, Bryant was able to establish himself as one of the most famous sporting faces throughout the globe, being smart enough to realise that he could sell his on-court persona as the ‘Mamba’ brand as well as his iconic Kobe sneakers with his signature logo.

Unlike many superstars of American sport, Bryant was unique, gaining a worldwide fanbase from both from that will to not be beaten, but particularly his appreciation of different cultures.

Having grown up in Italy, where his father was a professional player, Bryant’s connection to Europe was huge, encapsulated by his love of ‘soccer’ among other sports.

There are numerous stories of how he would engage with his teammates, or trash talk opposition players, in different languages. Even stopping the Dallas Mavericks’ Slovenian superstar Luka Doncic in his tracks by talking Slovenian to him while sitting courtside just a few weeks ago.

Mavericks’ Luka Doncic on meeting w/ Lakers legend Kobe Bryant: “He was talking Slovenian. He was talking my language. I was really surprised.” pic.twitter.com/IE9sLtZ2TZ

His openness and willingness to engage with other regions and lifestyles, more than likely due to his upbringing outside of the USA, is without question why his connection to fans across the world was so great and why his passing has been such a global story.

After news of his death in a helicopter crash broke on Sunday evening I spent the rest of the day watching continual memorial coverage on ESPN and refreshing Twitter for hours on end, stunned and saddened.

This wasn’t from being a ‘Kobe stan’ or even someone who had been fortunate to follow too much of his career – however had I discovered my love of basketball sooner I am certain I would have, due to his severe hatred of losing.

But it was because Kobe was someone who was simply pictured in my head as near-immortal, an incredible athlete who seemed destined to live into old age continuing to be successful due to his mentality.

We see many elite sporting greats who come to the end of their careers and are content to take the easy route into their post-playing career by wandering into a television studio once or twice a week or by simply disappearing from the spotlight.

That is what felt the most tragic about this sudden passing of Kobe – negating of course that also eight others, including his 13-year-old daughter died in the crash –  it was that despite all of his incredible accomplishments achieved on the court he appeared to have so much more to give and wanted to establish success away from his basketball achievements.

This animated short about #Kobe won an Oscar last year.

Watching it will give you chills.

“My mind can handle the grind but my body knows it’s time to say goodbye.
And that’s OK.
I’m ready to let you go.”

Winning an Academy Award for a short story surrounding his love-affair with basketball shortly after retirement was just a small part of that, the recent clip of him at a Brooklyn Nets game coaching his daughter courtside about the game they were watching another.

In recent years he had already begun a process of giving back to younger players in the NBA through mentoring, also engaging athletes from other sports such as Novak Djokovic, something the Serbian only revealed days before Bryant’s passing.

He was also in control of a 10% stake in the rapidly growing BodyArmor company and had also started a venture capital firm, Bryant-Stibel, with his budding business career just beginning.

It appeared Kobe had so much more to give not only to sport but other areas of life as well and it’s a great shame we will no longer get to witness it.