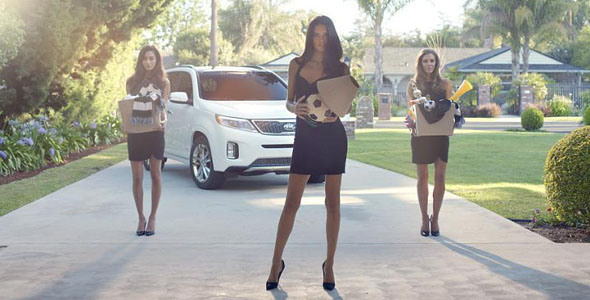 The initiative, which includes TV, print, digital, social, point-of-sale and radio components as well as Kia serving as the presenting sponsor of pre-match shows on ABC and ESPN, marks the second time the brand and Lima have teamed up following her memorable role in 2012’s “Drive the Dream” Super Bowl commercial.

The three 30-second ads were created by David & Goliath and are available now for viewing at Kia.com/FIFA, and will make their broadcast debut when group play begins on June 12.  Beyond the English- and Spanish-language versions of the spots, additional footage and content is available at Kia.com, and campaign extensions include elements on Facebook, Twitter, Instagram, Vine, Google+ and Pinterest.

“Soccer’s popularity in the U.S. is growing rapidly and as Official Automotive Partner of the World Cup we have a unique platform to showcase two of Kia’s most popular vehicles to the sport’s passionate and diverse fan base across the country,” said Michael Sprague, executive vice president of sales and marketing, KMA. “The reaction to Adriana Lima’s appearance in ‘Drive the Dream’ was overwhelming, and with the World Cup being staged in her home country of Brazil and her love for the game it was a natural fit to partner again and add a bit of glamour and humor to our ‘fútbol’ campaign.”